If you’re in need of some serious rest and relaxation, few remedies work better than a sunny beach holiday - especially if it’s somewhere tropical. We’ve rounded up five of our favourite beach destinations, from the balmy seas of Costa Rica to the secluded coves of Southern India, for all those looking to escape to warmer climates. 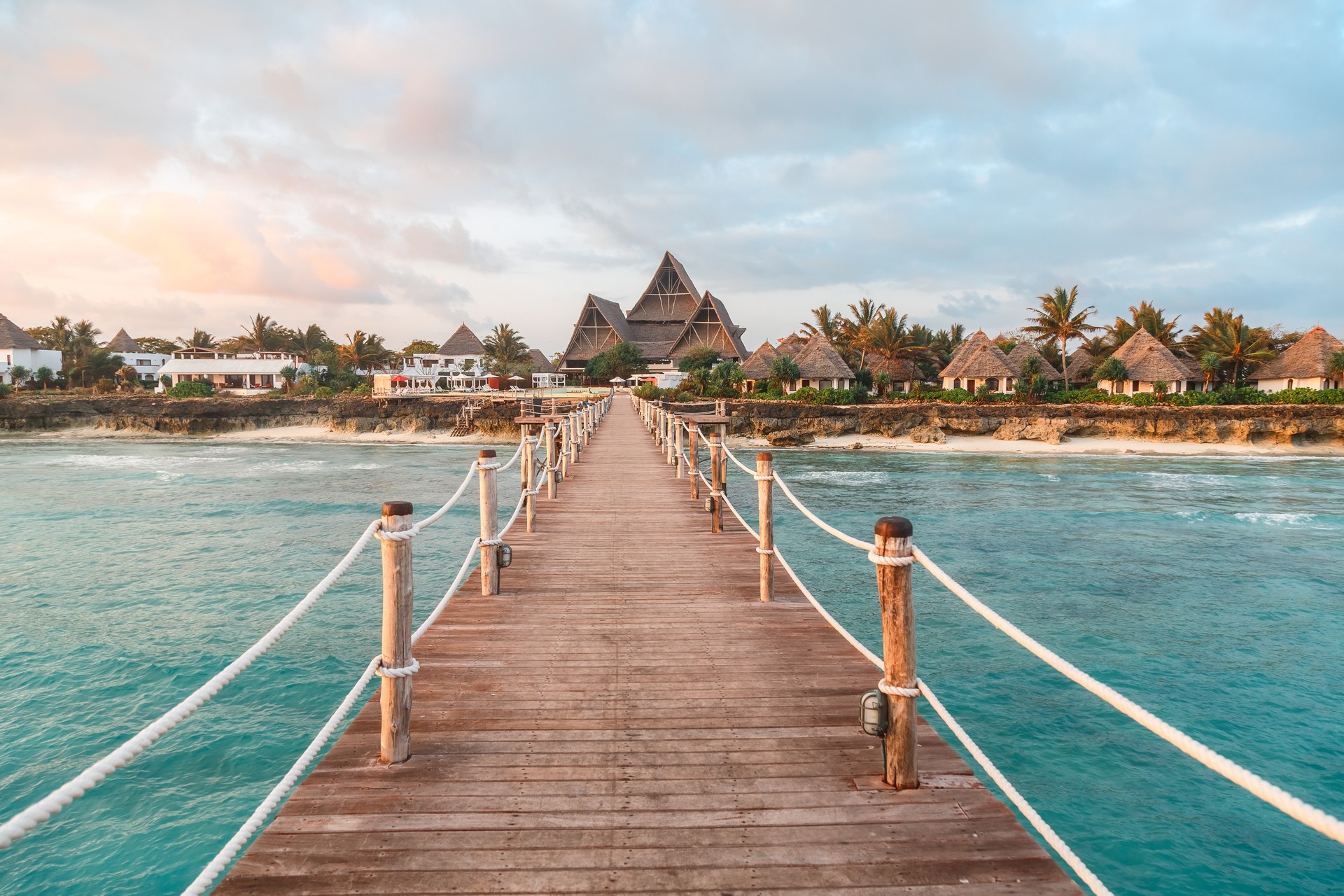 Our first pick of the best beach destinations is the South American nation of Colombia. While there are numerous beautiful beaches scattered throughout the mainland, you should head to the country’s islands to get a taste of remote Caribbean paradise. The San Andrés Archipelago is the perfect destination to spend your days lounging in a hammock, rising only to snorkel in the crystal clear waters as you encounter inquisitive turtles and colourful fish. Located closer to the coast of Nicaragua than to Colombia itself, the archipelago is surrounded by the McBean Lagoon National Natural Park which encompasses nearly 10 km of protected coral reefs. 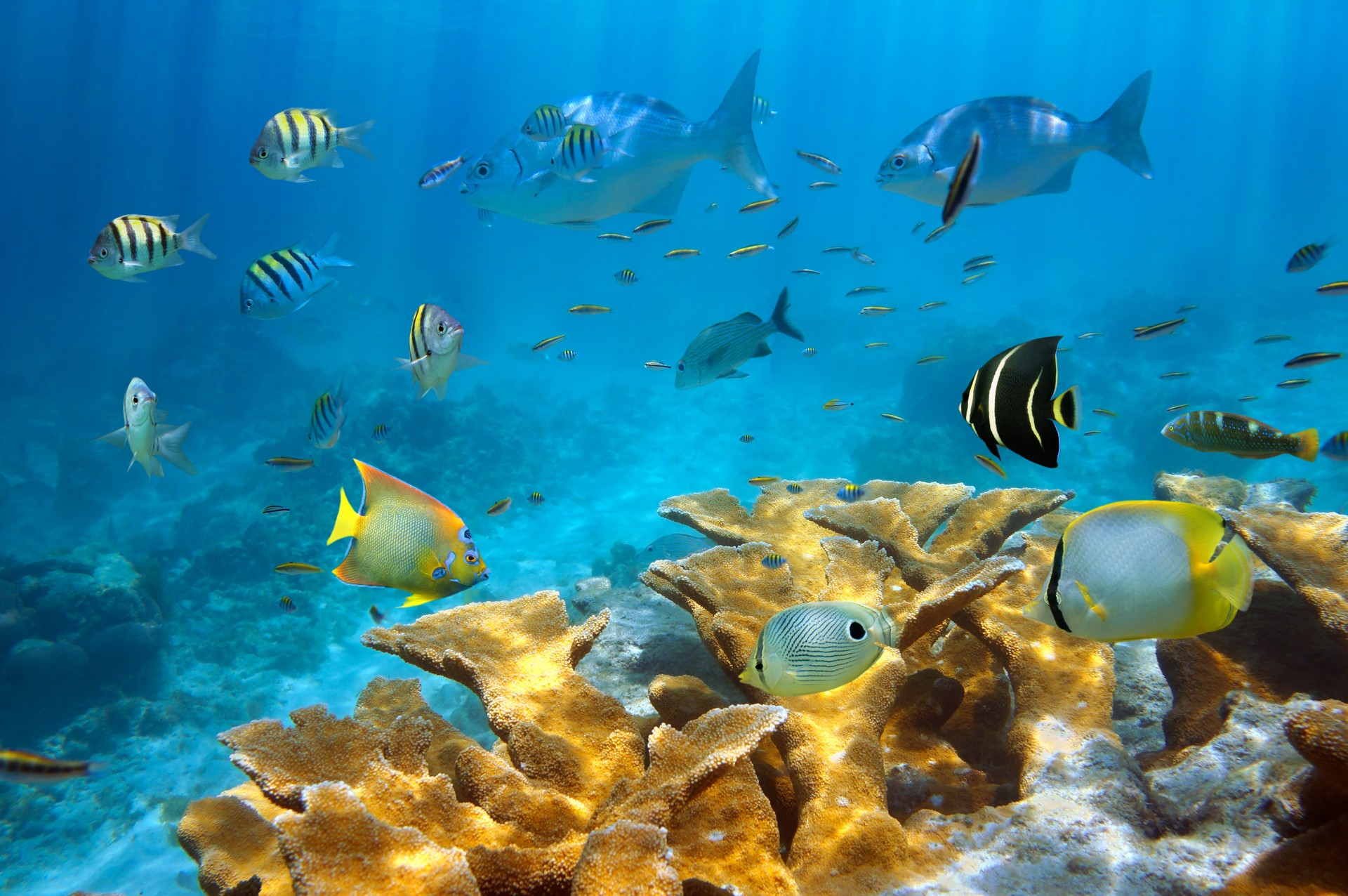 Due to its remoteness the San Andrés Archipelago is still relatively untouched by large scale resorts, especially the smaller islands of Providencia and Santa Catalina, so it is the perfect destination for escaping the large crowds of fellow beach-goers. Just be aware that life moves at a considerably slower pace here and that the lack of resorts may also result in a little less luxury than other beach destinations. 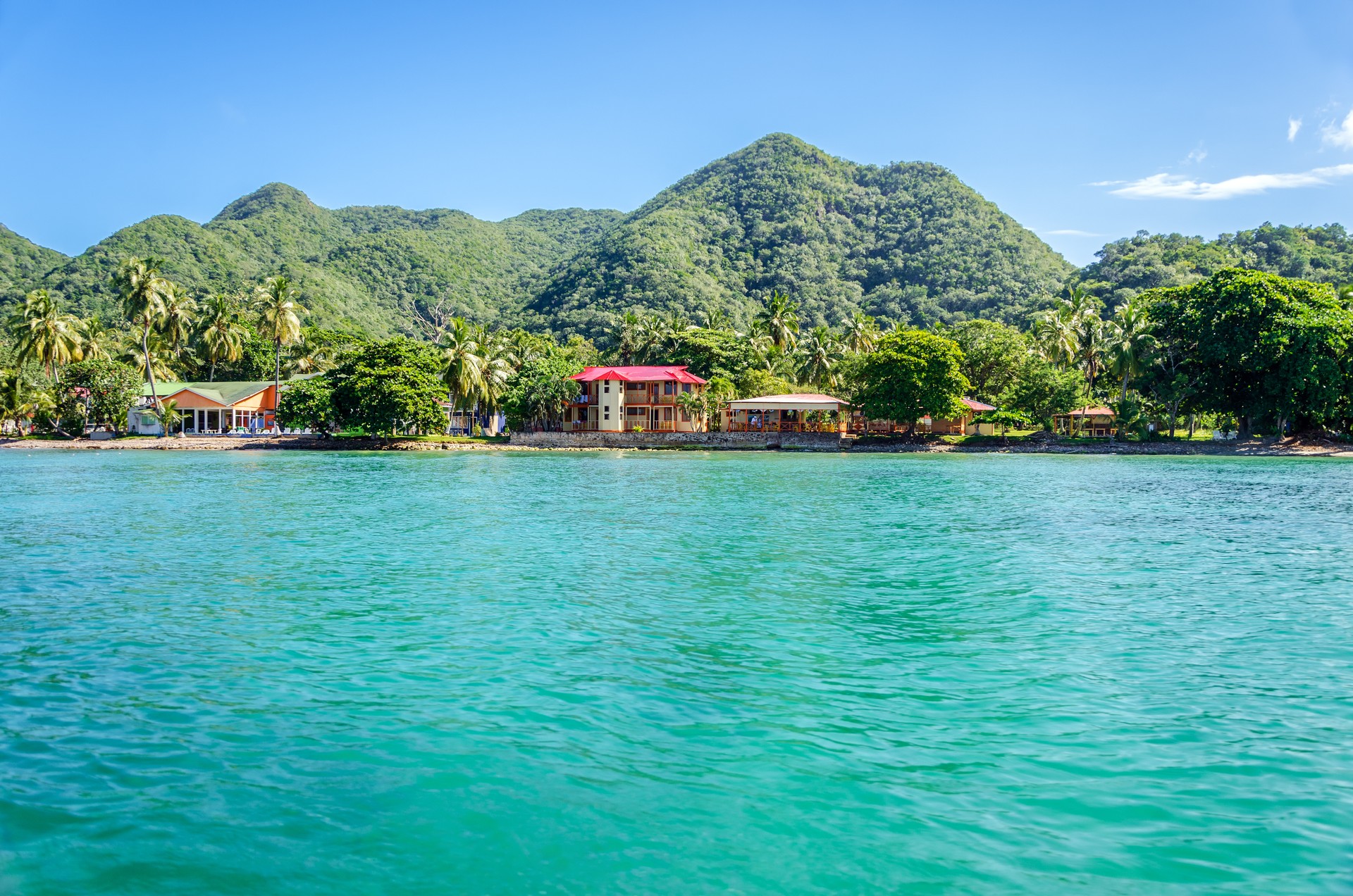 Speaking of laid-back islands, our second beach destination runs along the same theme. The Zanzibar Archipelago is formed of three islands situated roughly 25 km off the coast of Tanzania. Unguja is the largest of the three and enjoys some of the best beaches the African continent has to offer. The island’s northernmost tip is particularly charming, with the lively Nungwi Beach offering miles of paradisiacal coastline with opulent hotels and convivial bars and restaurants. 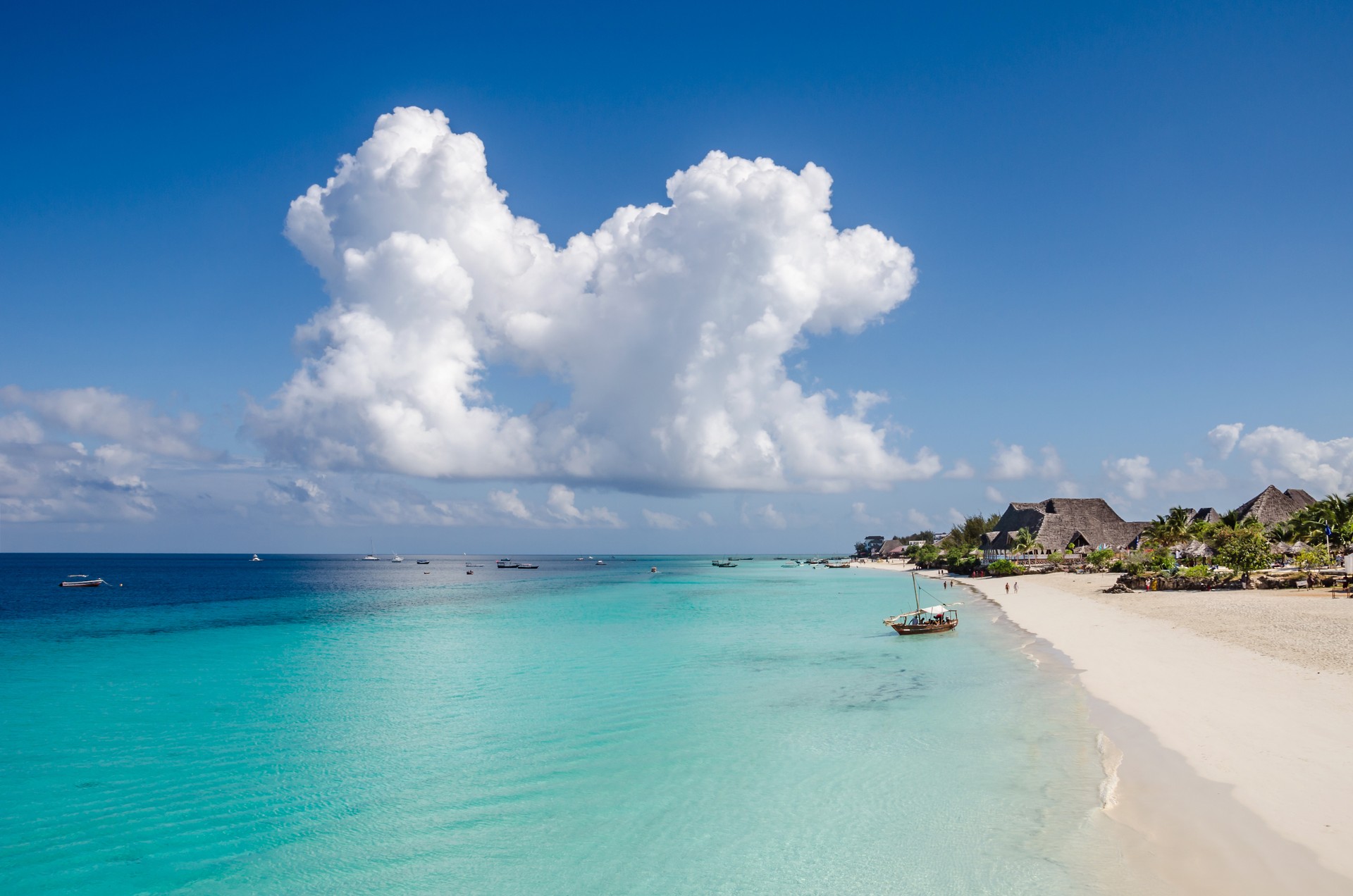 If you prefer more secluded spots then head to the beaches of Matemwe or Pongwe on Unguja’s eastern coast. Facing out towards the vast expanse of the Indian Ocean, these beaches feature fewer resorts and provide the perfect location to relax with minimal disturbances. 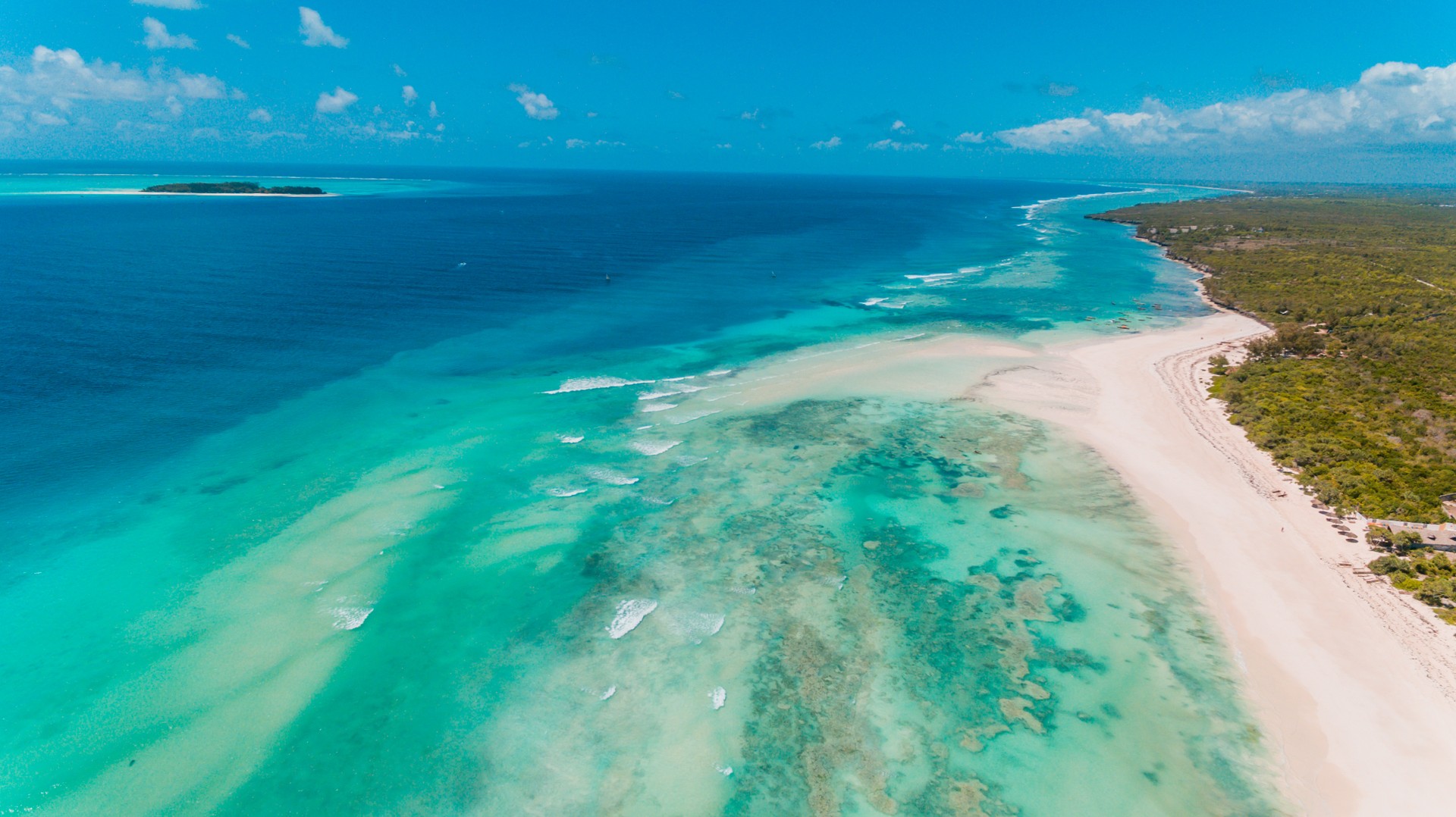 India has been a revered beach destination for decades, made popular by the swathes of bohemian travellers who arrived in the 1960s and 70s as part of the hippie trail - the overland route which crossed over much of the Middle East, Nepal and India from Western Europe. Traditionally these travellers would stop off at the coastal region of Goa, however we suggest venturing further afield to the more secluded beaches of Gokarna (about an hour south of Goa).

The coastline surrounding Gokarna is broken up by several inviting coves including the aptly named Paradise Beach. Sheltered from the wind by the surrounding cliffs this inlet can only be reached on boat or by foot, adding to its secretive nature. Many visitors choose to camp on the beach for a day or two, so bring a tent of your own and spend the night listening to the sound of the waves lapping the shore as you drift off to sleep. 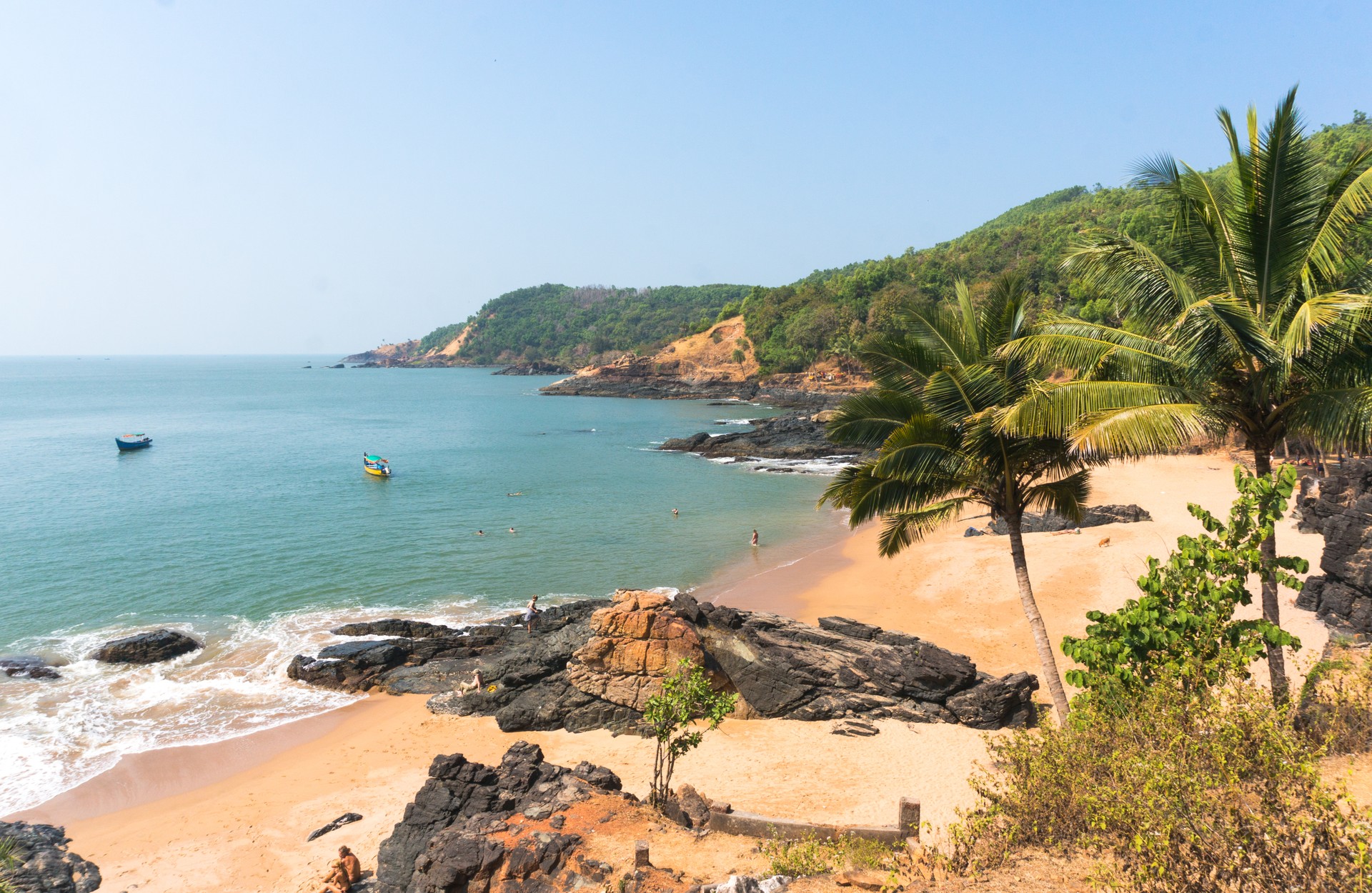 The verdant Central American country of Costa Rica is blessed with magnificent wildlife, lush rainforests and heavenly beaches. We’ve picked two spots on the country’s eastern and western coasts which are equally picturesque and well worth a visit. Playa Manuel Antonio is situated on the west of the country and is renowned for its lively nature and frequent festivals. In order to reach the beach you will first have to trek for about 30 minutes through the abundant jungle of the Manuel Antonio National Park. Look up to the treetops to spot monkeys leaping from tree to tree or sloths dangling from the branches before reaching the bay’s entrance. 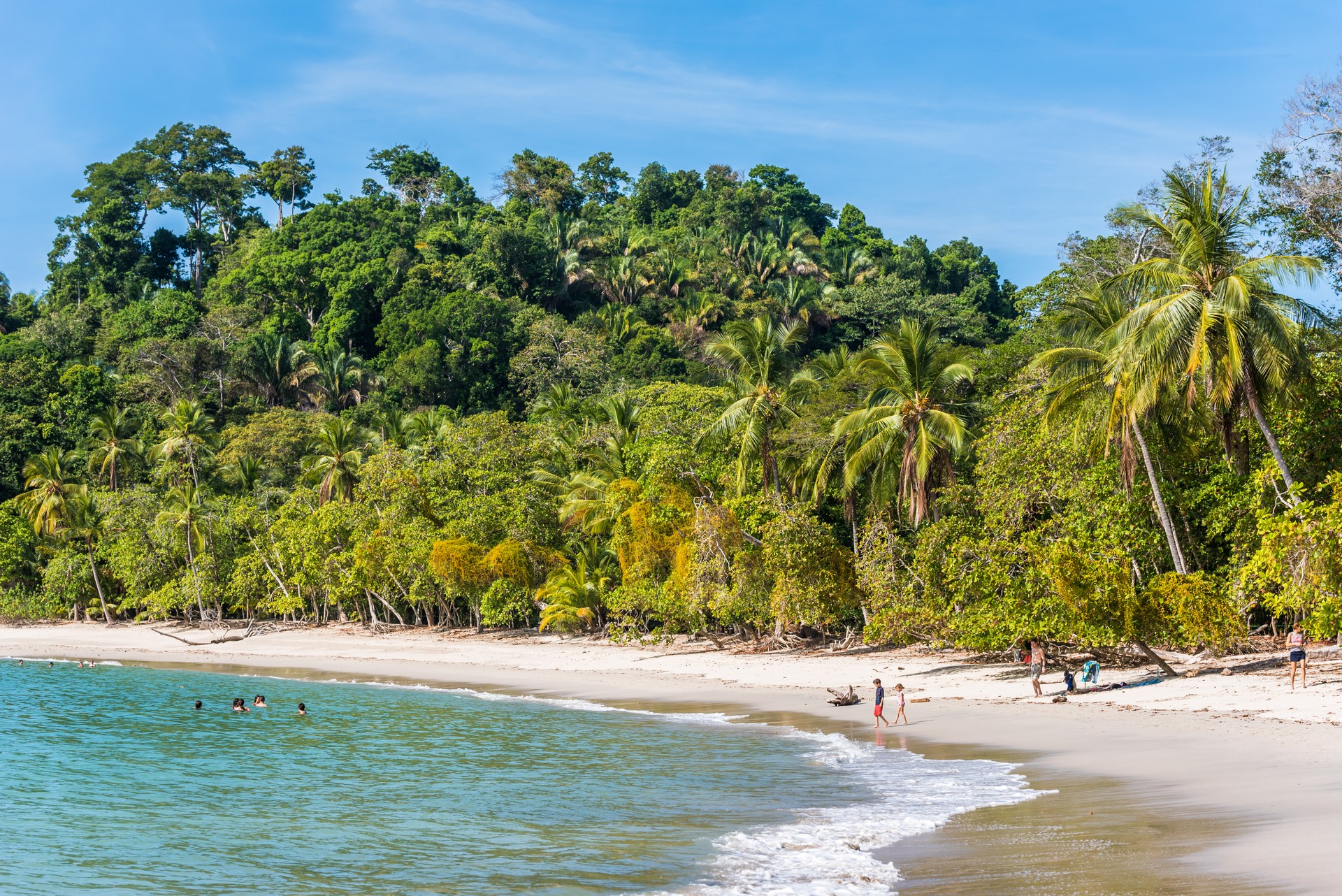 Playa Punta Uva is located on the country’s Caribbean coastline, roughly 8 km outside of the laidback fishing town of Puerto Viejo. Once you arrive relax on the sandy beach, take a dip in the water or rent a kayak and go paddling up the nearby river - framed by mangroves and overhanging trees this provides the perfect midday break from the sun. 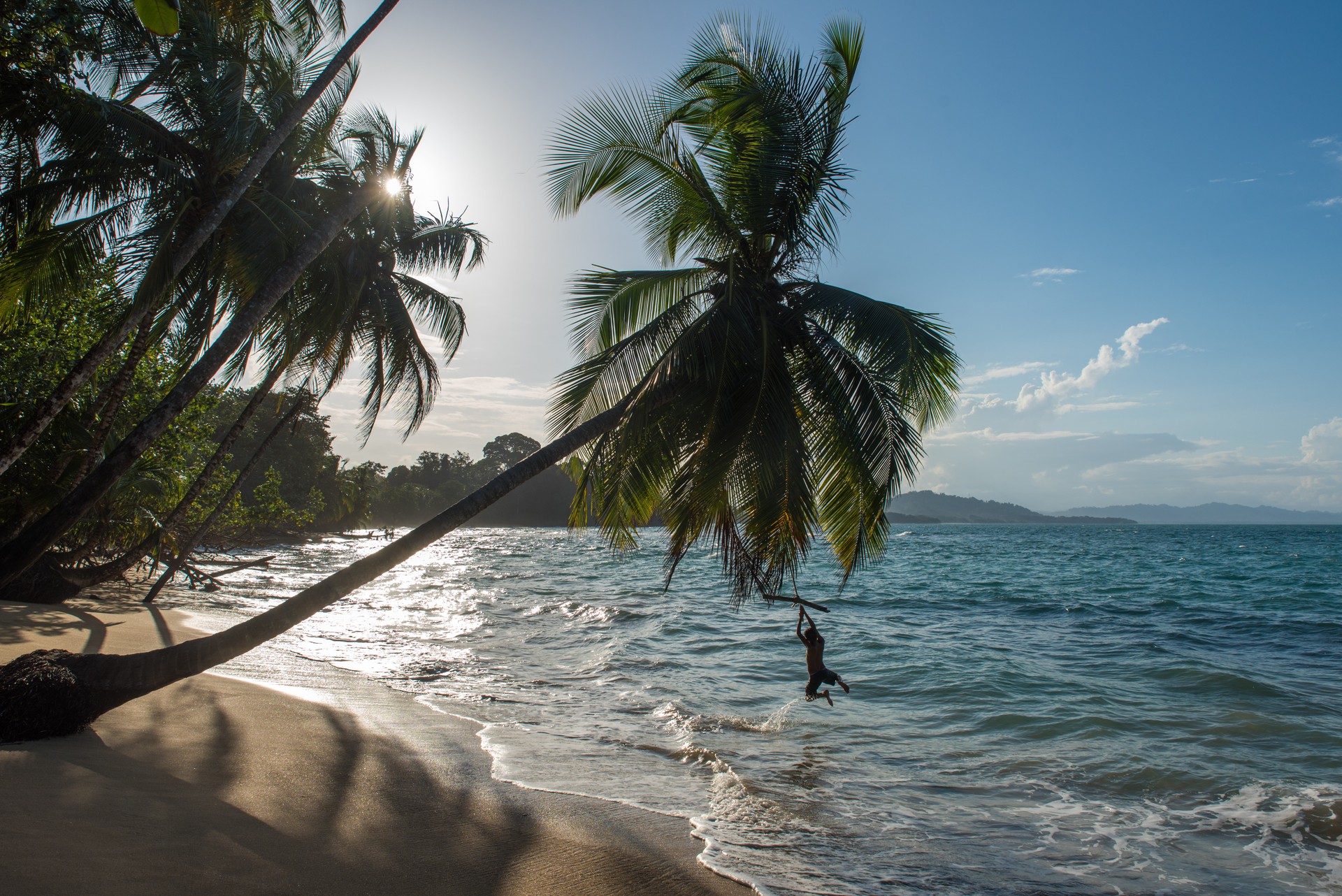 Our final beach destination is the Southeast Asian gem of Cambodia. The country’s neighbouring islands of Koh Rong and Koh Rong Samloem can be found roughly 15 km offshore, and provide the perfect destination for a coastal getaway. Koh Rong is the larger and livelier of the two and it is not uncommon to encounter parties taking place on the main beach which continue well into the early hours. 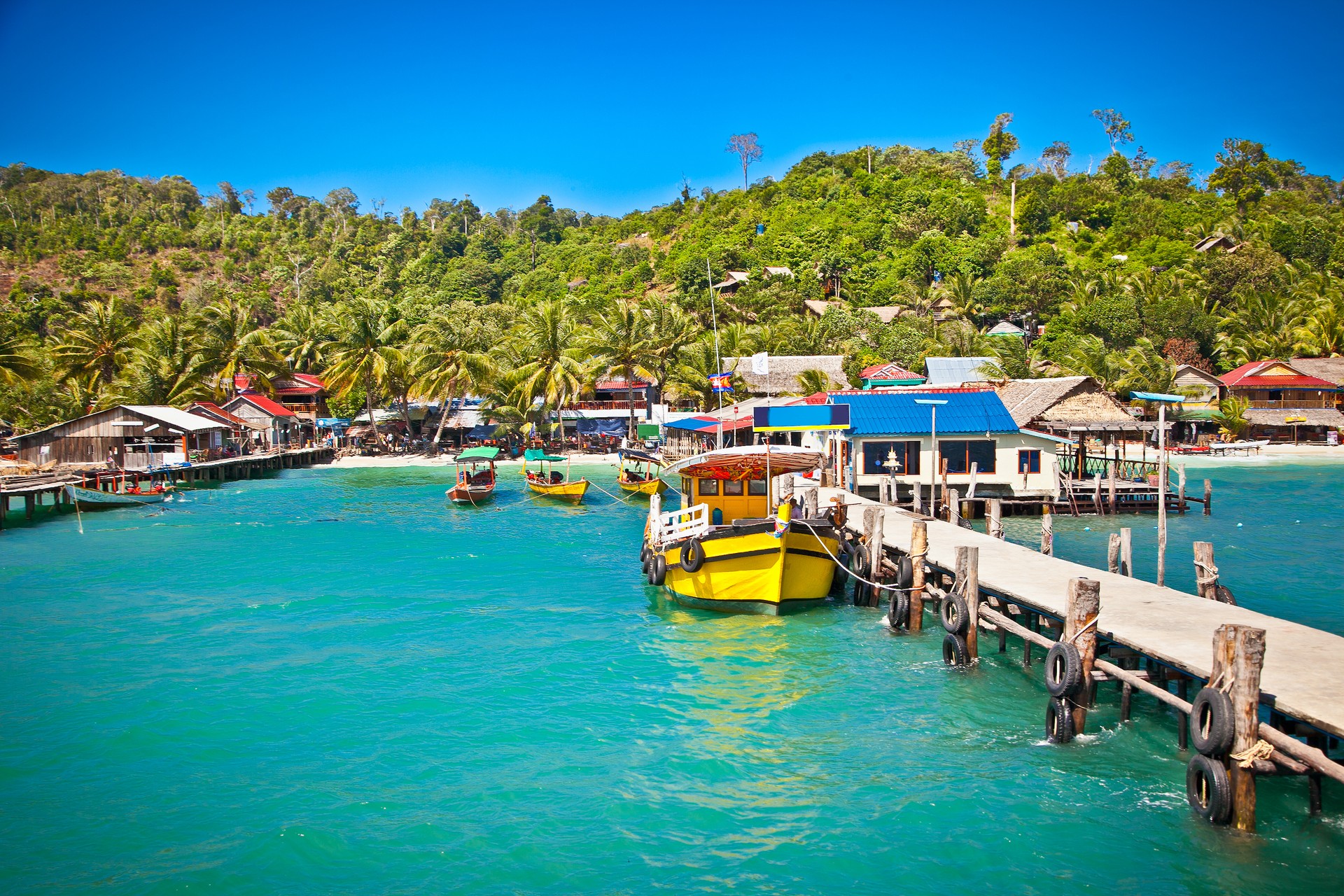 If you’re travelling with children, or simply prefer a bit of peace and quiet, then Koh Rong Samloem has a distinctly more peaceful vibe. The island’s main beach, Saracen Bay, is characterised by 3 km of soft, white sand leading into a vibrant, turquoise sea. If you remain on the beach until after dark it is also possible to observe the iridescent glow of the bioluminescent plankton which live in the shallows of the water. This makes for a particularly magical experience and is made even better when you crash into the water yourself, setting off a trail of bright blues and greens behind you. 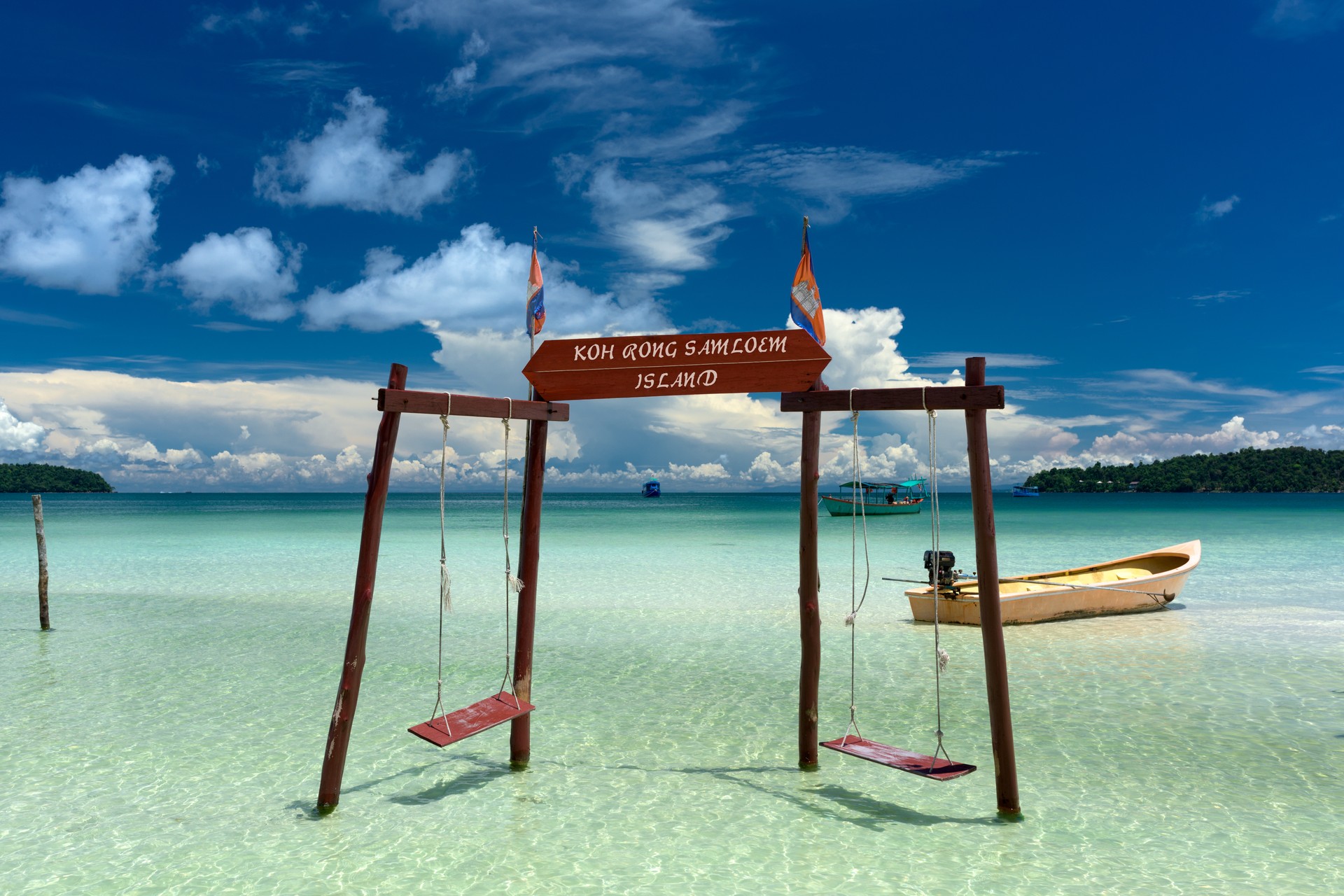 If you’re in need of a beach getaway, then follow the links scattered throughout this article to be redirected to one of our many sample itineraries. They’ll provide you with some inspiration for your ideal beach holiday before contacting one of our local operators - who are skilled at creating bespoke holidays which cater to your needs and preferences. If you would like to speak to someone in the TravelLocal office please call +44 (0)117 325 7898.