Best places to visit in Chile

From the enchanting Atacama Desert in the north to the luscious green landscapes and colossal glaciers in the south, Chile is a truly unique destination. This long, thin country is brimming with culture, history, nature, vineyards and thrilling outdoor activities. We’ve sought out some of the top places to visit whilst you’re exploring this magical country. 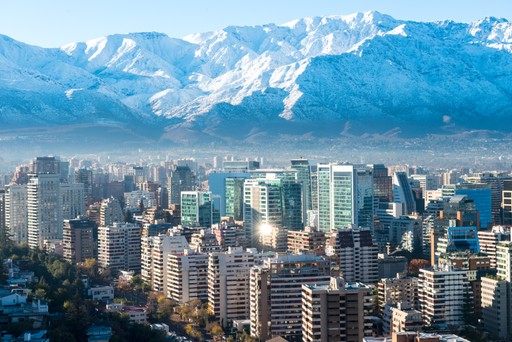 Santiago is Chile’s bustling capital, an urban jungle nestled in a valley, surrounded by the beautiful Andean mountains. In winter, their snow-topped peaks create striking panoramic views, and in summer the city’s streets are lined with towering green trees. This metropolis is split into “barrios” (districts), which each have their own unique identity.

The colourful colonial Barrio Bellavista is known for its bold street art and popular local restaurants which spill onto the streets. Visit ‘La Chascona’, one of the fascinating homes of Chilean poet, Pablo Neruda. His creative writing style is echoed in its walls, and it’s filled with interesting architectural quirks. Barrio Italia is a wonderful off-the-beaten track destination where you can meander through charming streets, hop into cafés, or simply explore one of its indoor arcades.

Santiago is home to some fantastic museums, including the National Museum of History and the Museum of Memory and Human Rights, the latter constructed to pay homage to the victims of dictator Augusto Pinochet during his brutal regime. It is also known for its lively bar scene. The historical neighbourhood of Barrio Lastarria has one of Santiago’s finest wine bars, “Bocanáriz” which boasts of a menu with nearly 400 Chilean wines to sample. Its neighbouring restaurant “Chipe Libre” is the perfect spot to try Chile’s finest cocktail (or perhaps Peru’s – a constant topic of hot debate) – the famous Pisco sour; a sharp blend of lemon, pisco (a sort of brandy) and egg white.

“Valparaíso, what an absurdity you are, how crazy: a crazy port. What a head of dishevelled hills, that you never finished combing. Never did you have time to dress yourself, and always you were surprised by life.” - Pablo Neruda 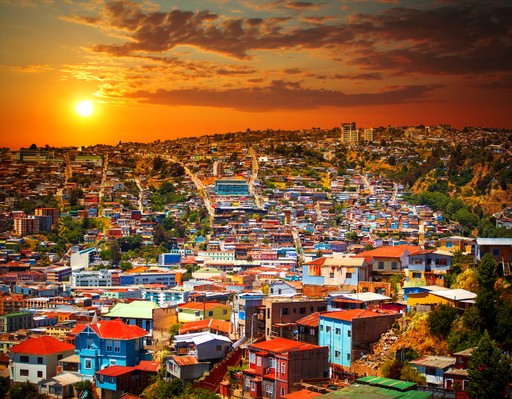 Located just two hours from Santiago, this chaotic, crumbling, colourful seaport has attracted writers and artists for centuries - its charming alleyways, street art and cable cars scream creativity. Listed a UNESCO world heritage site in 2003, it is no wonder Pablo Neruda chose to locate another one of his houses, “La Sebastiana” in this bohemian city. Each nook and cranny of the city holds its own surprises: charming cafés are dotted throughout, wonderful art murals liven the streets, and historic cable cars handily transport tourists and locals up steep “Cerros” (hills). Cerro Alegre is known for its unique street art and Cerro Concepción for its impressive Lutheran Church of La Santa Cruz.

The art scene is truly exceptional here, with an accolade of galleries and museums to discover. From the contemporary art of Casa E, to the Chilean and Latin American works of Sala de Arte Wentenche and street art of Cerro Bellavista, Valparaíso is an artist’s haven. In fact, this city is known to be one of the graffiti capitals of South America – the best street artists even get paid for their pieces. The sunset is particularly stunning to enjoy from atop a Cerro, as the mismatched houses and billowing hills change colour with every moment. 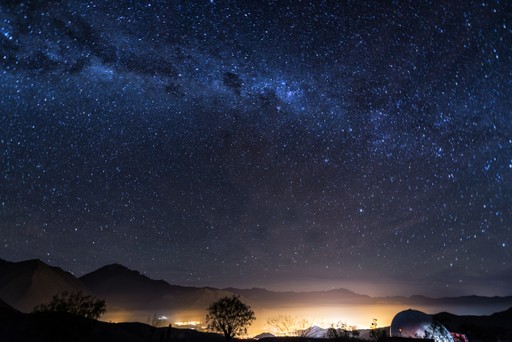 Elqui valley is the place to be for wine and pisco tasting, and wondrous, world-class stargazing.

Make sure you visit pisco distilleries such as family-run Pisquería Aba and the Destilería Pisco Mistral or wineries like Cavas del Valle Winery and family-owned Viña Falernia. With such little light pollution, the valley is known to be one of the best spots to see stars across the globe. It has a number of observatories to discover, including the highly regarded Mamalluca Tourism Observatory and the Pangue Observatory. For adventure seekers, it is possible to cycle or horse ride through the undulating hills; a fantastic way to explore the area whilst soaking up the stunning panoramic views. 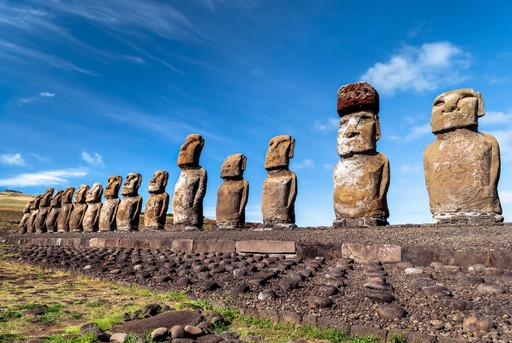 Easter Island, also known as “Rapa Nui”, is a fascinating destination with a mysterious history. Its current name originates from when the first European explorer, Jacob Roggeveen, set foot on the Island on Easter Sunday in 1722. Its immense 13 feet tall monolithic statues, made from solidified volcanic ash, are one of the main historical sources scholars have to analyse this island’s enigmatic history. It is home to 887 of these colossal “moai”, which were constructed by residents of Rapa Nui between approximately 1250-1500 AD. Scientists have suggested the theory that 50-150 people collaborated to drag these huge figures across great distances using sleds and rollers. However, the meaning behind their existence continues to be disputed by historians. One clinical professor of psychiatry at Harvard Medical School estimated that they were crafted to create a remedy for leprosy, to visually counter its effects. She hypothesised that the figures mimicked the “opposite” effects of the condition. Due to weathering, conservation efforts are of paramount importance. Sadly, some statues are even turning into plane rock. Set against the spectacular countryside of Easter Island, these silent but telling sculptures are one of Chile’s biggest enigmas. 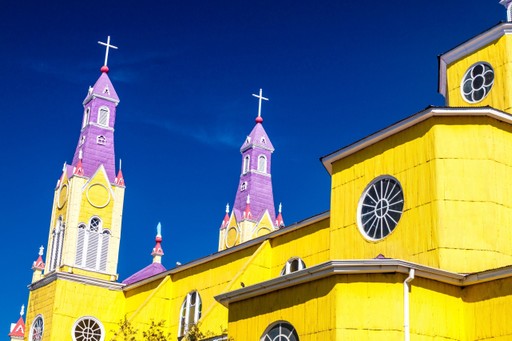 Chiloé island is known for its rolling hills, beautiful ecclesiastical wooden churches, and “palofitos” (colourful houses on stilts). This island can only be reached by boat or plane, and its culture is a unique blend of European and indigenous influences. The region is home to approximately 70 churches which mark the arrival of the Jesuits in 1608. Missionaries travelled and built churches across the archipelago in collaboration with local builders to evangelize Chiloé. When the missionaries were absent, indigenous peoples would look after these authentic churches. Churches of note include the Church of San Francisco, the Church of Quinchao, and the Church of Rilán, all of which have been declared UNESCO world Heritage sites. The neo-gothic Church of San Francisco is the third oldest church in Chile, and has a wonderful bright yellow façade. Declared a national monument of Chile in 1971, the Church of Quinchao is the only surviving traditional church of the Jesuit era, and its construction finished in the 1880s. It was designed using the architectural style of Chilota, and is marked by its multi-tiered central tower. The Catholic Church of Rilán has a beautiful arched aqua blue interior. All are well worth a visit! 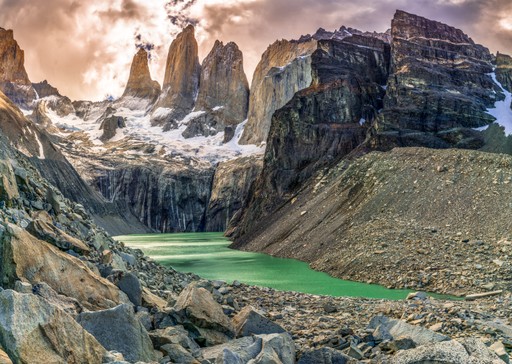 The Torres del Paine National Park is home to exhilarating trekking routes and gorgeous scenery. It was declared a Biosphere Reserve by UNESCO in 1978, as it plays a vital role in scholarly environmental studies, boasting a wide variety of ecosystems. The most famous trekking routes are the “W trek” which typically takes five days, and the more arduous and challenging 10-day “O trek.” Towering mountains, magical glaciers, lakes and rivers make for impressive views throughout the hike.

Interesting wildlife to spot here whilst soaking up the breath-taking views can include rhea, the Andean condor, flamingos, and many other bird species – if you are lucky you may even be able to spot a puma. With the help of a guide - it is possible to find spots to drink natural mountain waters, which have an incredibly fresh, icy taste.

The park is called the “Torres del Paine” for its famous trio of rock towers, which visitors often trek to in early hours of the morning to enjoy the sunrise. The park has very strict guidelines with regards to campfires, which can only be lit in designated areas and for good reason. At the end of 2011, a major fire caused by a tourist burnt over 40,000 acres of the park which resulted in its temporary closure, so be sure to heed the rules.

Located in Chile’s Norte Chico region, the Atacama Desert is a place of extremes and adventure. It is one of the driest places on earth, known for its dynamic landscapes and breath-taking excursions. Its hub, San Pedro de Atacama, previously a copper and quartz mining town, is now a gathering place for like-minded travellers and adventurers. Tours of the barren Death and Moon Valleys are dream-like, and the shooting geyser springs of the “Geyser del Tatio” open your eyes to the wonders of nature. The “Valle Arcoíris”, or “Rainbow Valley” shows off spectacular multicoloured mountains, whose composition are made up of varying concentrations of salts, minerals, and clay.

The dry atmosphere of the desert provides perfect conditions for mummy preservation - amazingly the oldest mummy found in the Atacama dates from around 5000 BC, which predates that of the Egyptian mummies which are thought to date from 3000 BC. In spite of these arid conditions, plants such as cacti and tough grasses survive, and following an unexpected rainfall in northern Chile in August 2017, a beautiful bed of flowers blooms across typically barren land.

Like the Elqui Valley, the Atacama is also a fantastic place to stargaze, and houses the largest ground telescope in the world – ALMA. The desert is also home to some dense thermal springs, such as the scenic Puritama Hot Springs – a series of eight geothermal pools, located at the foot of a canyon.

If you would like to plan a trip to Chile, then get in touch with our local experts who are always on hand to create your perfect tailor-made trip, be it off the beaten path or to all the bucket-list destinations. To speak to someone in the TravelLocal office, please call +44 (0) 117 325 7898.