Needless to say, when it was announced within the company that we were filming our TV advert in the Azores, the Hawaii of Europe, everyone was slightly envious of the team that would be accompanying the film crew. Jutting dramatically up from the middle of the Atlantic ocean, shrouded in farmland and forests, surrounded by whales and dolphins, and home to hot springs and an ancient and UNESCO recognised viticulture, it is a place that has been firmly towards the top of everyone’s holiday bucket list.

Sadly only a couple of us were needed on-site, as our local expert Pedro was extremely helpful and did a lot of the legwork for planning where we ought to be filming. The lucky duo who were selected to go and accompany him were Huw and Jo and the rest of us just had to sit back and wait for the holiday snaps (and of course the advert which you can watch here if you haven’t yet caught it on TV).

We caught up with Huw on his return to hear a little more about where they went, what his highlights were and his top recommendations for anyone following in their footsteps.

What were the main filming locations for the TravelLocal advert?

For ease we stuck to the Azores’ main island of São Miguel for all our filming - and there were still ample locations to choose from. The main focus of the advert is wild swimming so our mission was to find two lovely, contrasting places for our actors to have a dip.

The first was in a nature reserve near Furnas. Accompanied by Jo, Huw and local expert Pedro, the crew shouldered their kit and walked along a trail through the forest for only a short while before arriving at the edge of a beautiful stream with a waterfall tumbling into a pool perfect for swimming in. In fact, while Jo refrained, once filming had finished Huw couldn’t resist a quick dip before the walk back through the forest.

You’d be forgiven for thinking that filming took place in a rainforest, but whilst this isn’t the case, it is a feeling that the dense, nature-rich forests of the archipelago really do deliver as you explore them. All over the islands, you’ll find  trails made of dark, beaten earth and smooth rock, weathered wooden bridges span boulder strewn gorges, and moss and ferns cling to black rock, dripping in the fine mist of a waterfall. If you’ve any dinosaur obsessed children, their imaginations will have a field day. 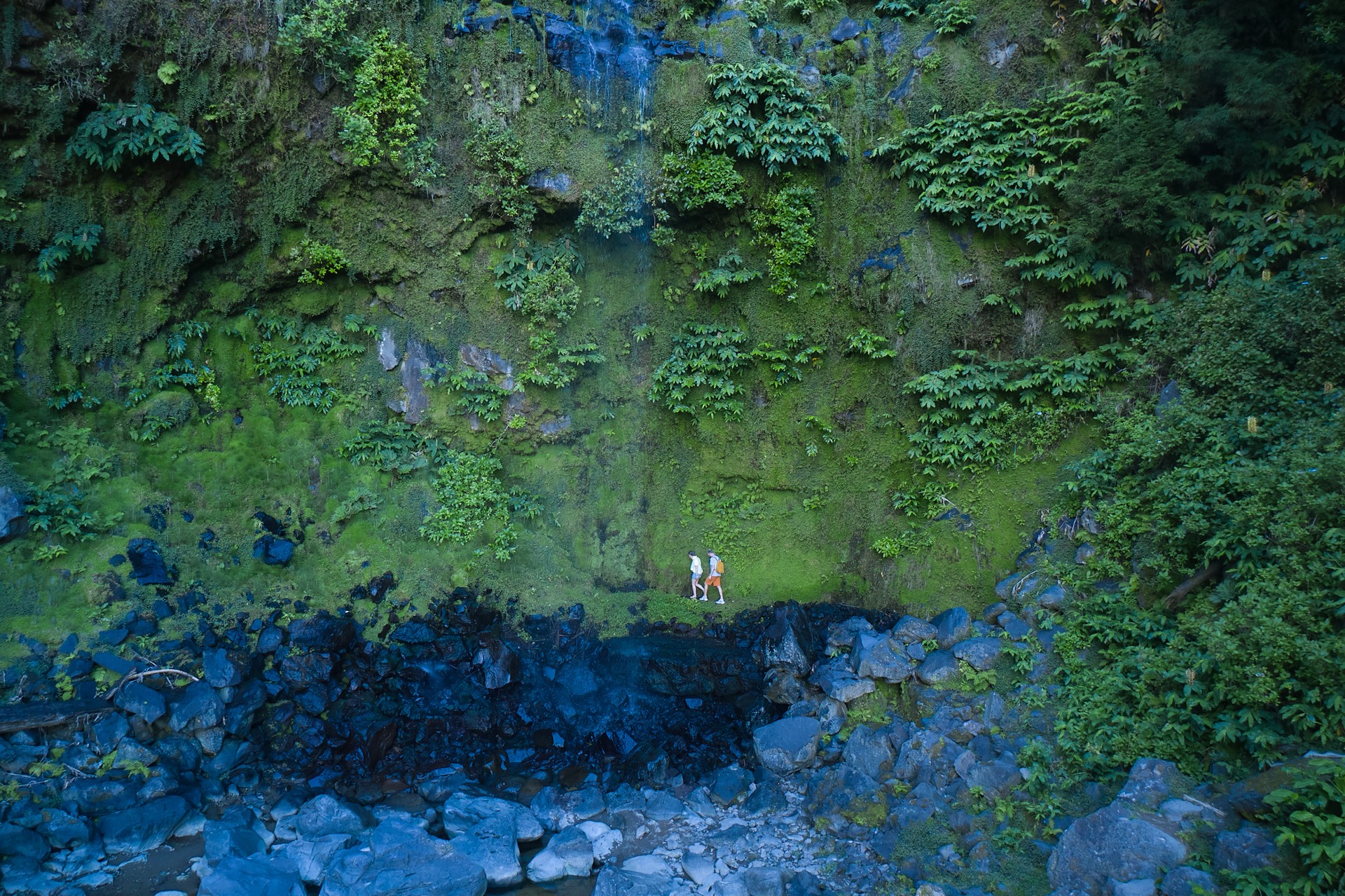 The next filming location was a lagoon on an islet off the south coast of São Miguel called Ilhéu de Vila Franca do Campo. It takes just 10 minutes or so to get there by boat from the main island and is lovely snorkelling territory. In fact while filming was going on in one part of the lagoon, Huw and Pedro grabbed some snorkels and bobbed around off camera. Huw said it was stunning - obviously completely different from snorkelling on a coral reef but all the more unexpectedly lovely for it, and perfect if you have children approaching or just entering their teenage years. Floating in just a couple of metres of calm water, he saw more than he could possibly recount but the image that stayed with him was a huge shoal of bass seemingly suspended in nothing, the sunlight streaming down and rippling around their silvery scales.

And that’s only small fry. One of the guides who escorted the crew from mainland São Miguel to Ilhéu de Vila Franca do Campo had recently taken a group scuba diving just outside of the lagoon, where the edge of the volcanic islet plummets into the depths. You obviously set out hoping for some lovely sightings, but even she was raving about the huge squadron of manta rays that soared past them within minutes of entering the water. 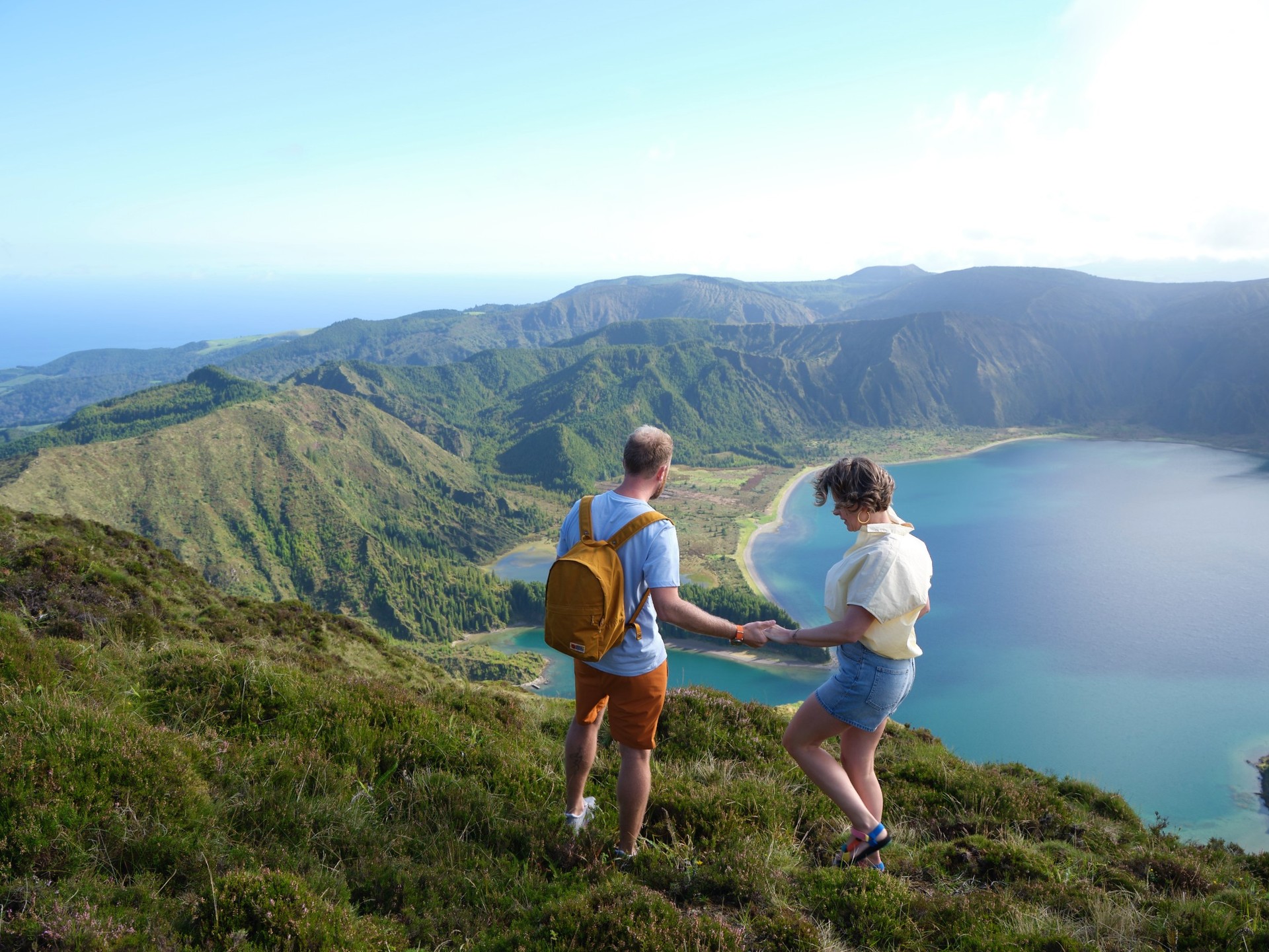 The final location for shots that we used in the advert was on a peak overlooking the Sete Cidades crater lake. The film crew cheated and got a little 4-wheeled help to reach the peak, but there are loads of trails taking you to any number of viewpoints overlooking the belly of the extinct volcano. It is a stunning place to take in the sunset, perhaps whilst sipping on some Portuguese wine. 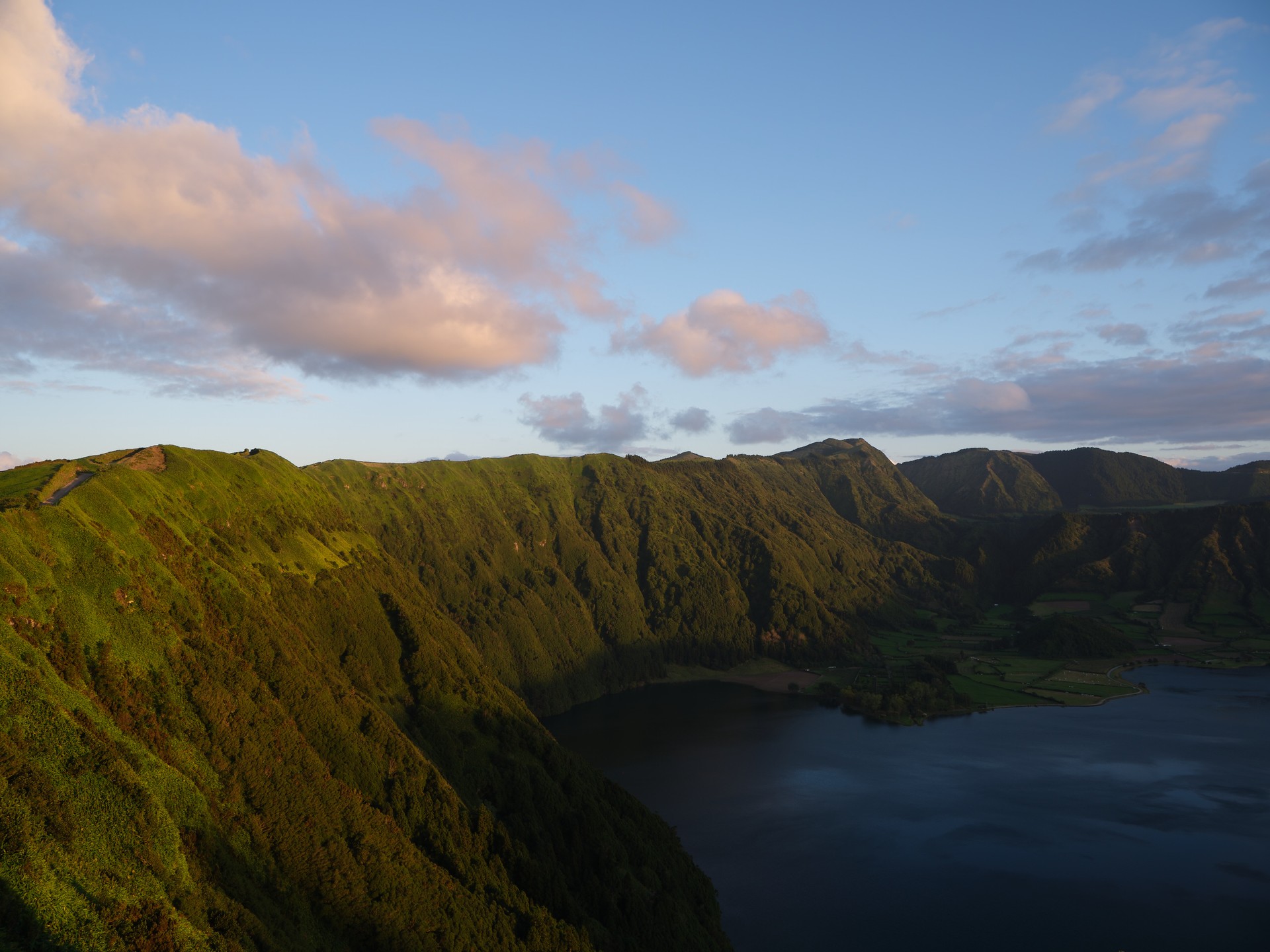 If you want to include any of the locations you see in our advert, then our local experts are the best people to help. Simply get in touch and they can weave them into your perfect holiday itinerary.

What did the crew get up to when the cameras stopped rolling?

An army marches on its stomach and a film crew is no different! Jo, Huw and all the talent ate together every evening, and the food was something that stuck in everyone’s minds. Pedro never failed to find them somewhere lovely and convivial to dine. The food was varied, fresh, and unerringly delicious and Huw recalls that Ponta Delgada in particular had lots of great options from seafood restaurants to cocktail bars. 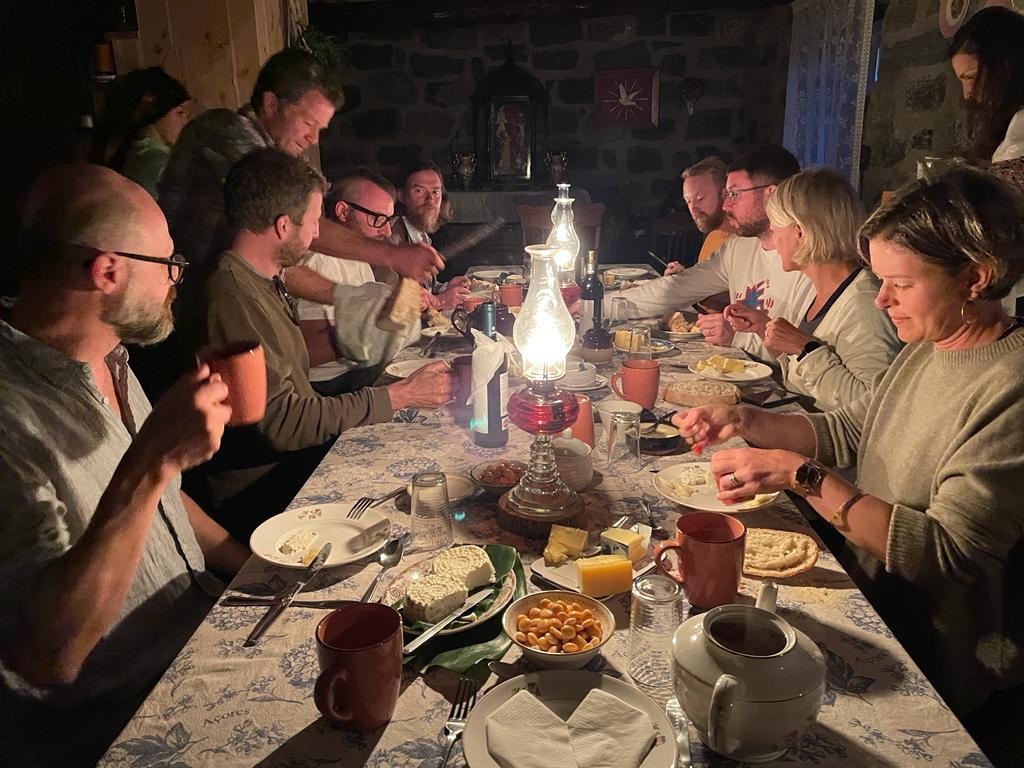 He also said that although it’s known to be a somewhat “touristy” thing to do, one of the most memorable meals was when they tried the Cozido das Furnas - a hearty stew that’s cooked in pits using the geothermal heat surrounding Lake Furnas. It wasn’t something they would have wanted to miss out on for the sake of remaining ‘authentic’ and you’re unlikely to have a chance to eat volcano cooked food again.

As already mentioned above, the snorkelling was always going to be a highlight, whether snatched between takes - “I just waded to my knees in a working harbour and saw so much!” - or done in their own time. A final treat that Pedro arranged for the crew once filming was complete was a trip out to sea to swim with the wild dolphins. 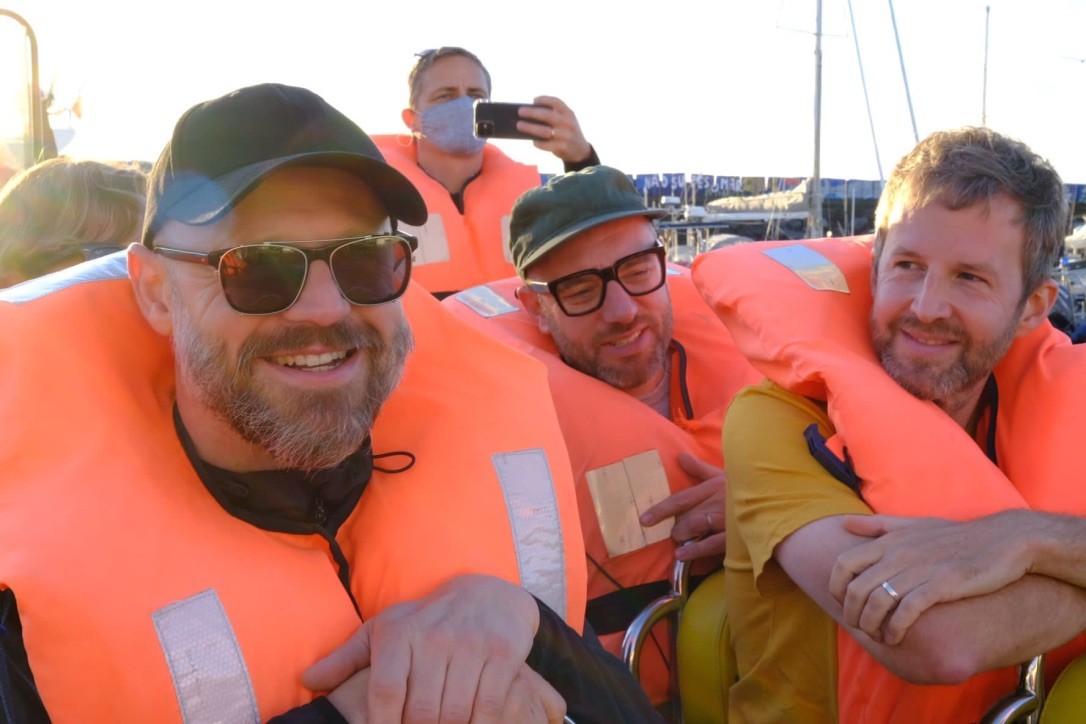 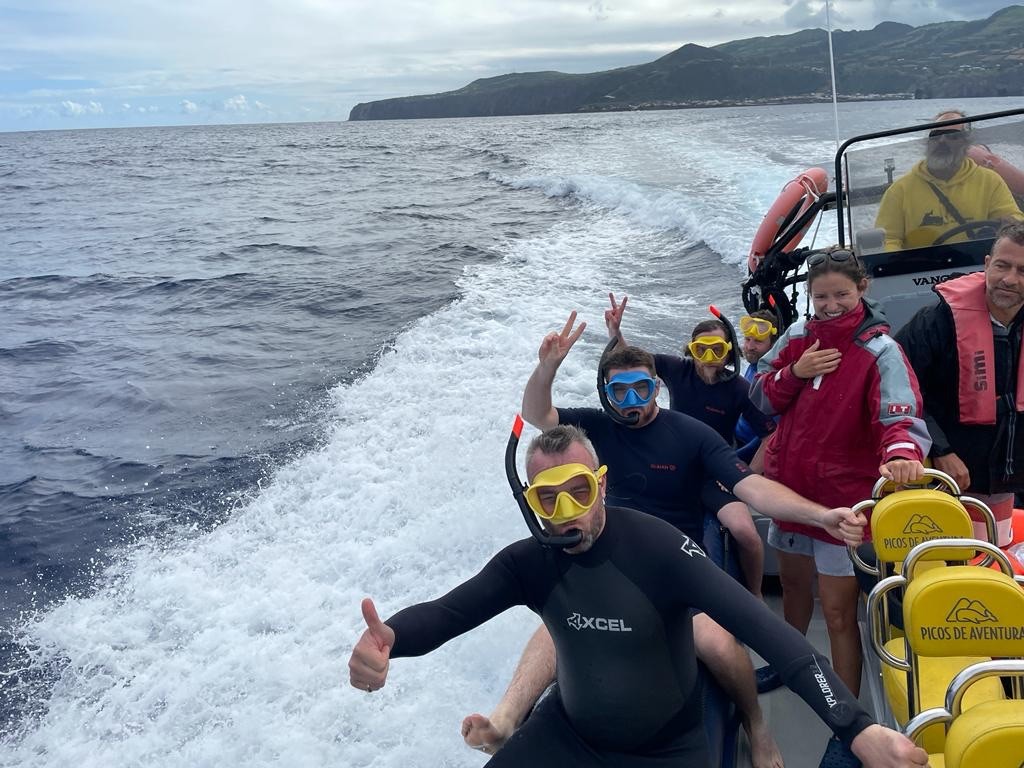 This is like nothing you’ve ever experienced - you’re not in warm tropical shallows, or seas clouded by swirling sands, but instead are suspended in temperate salt water above seemingly fathomless depths, surrounded by Atlantic bottlenose dolphins. The visibility is spectacular and you can clearly see them from quite some distance, pirouetting and playing as they approach you. Even those who didn’t have time to get in the water said even the boat journey was an experience in itself, with the pod frolicking around the bow and dancing in the wake. 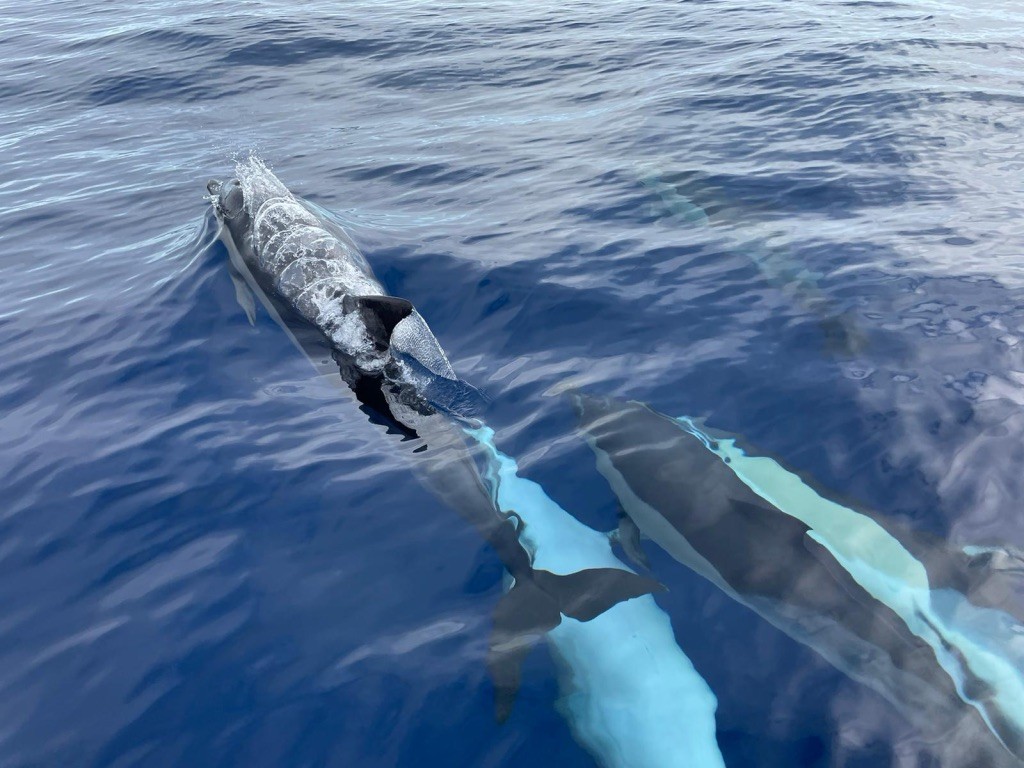 The Azores are famous for their hot springs, but it’s not just steaming rivers and bubbling pools in the forest where you can experience them. At one point Huw, Jo and our two actors, Tom and Els, headed to Ponta da Ferraria which has ladders to help you into a sea inlet where hot springs bubble up from below the surface and mingle pleasantly with the cooler sea water. The inlet is cross-crossed with strong ropes which you can hang on to so that the swell doesn’t knock you off course whilst you relax and chat. In fact, everyone was so busy relaxing and chatting that no one took any pictures so we've had to make do with a stock image to give you a general idea... 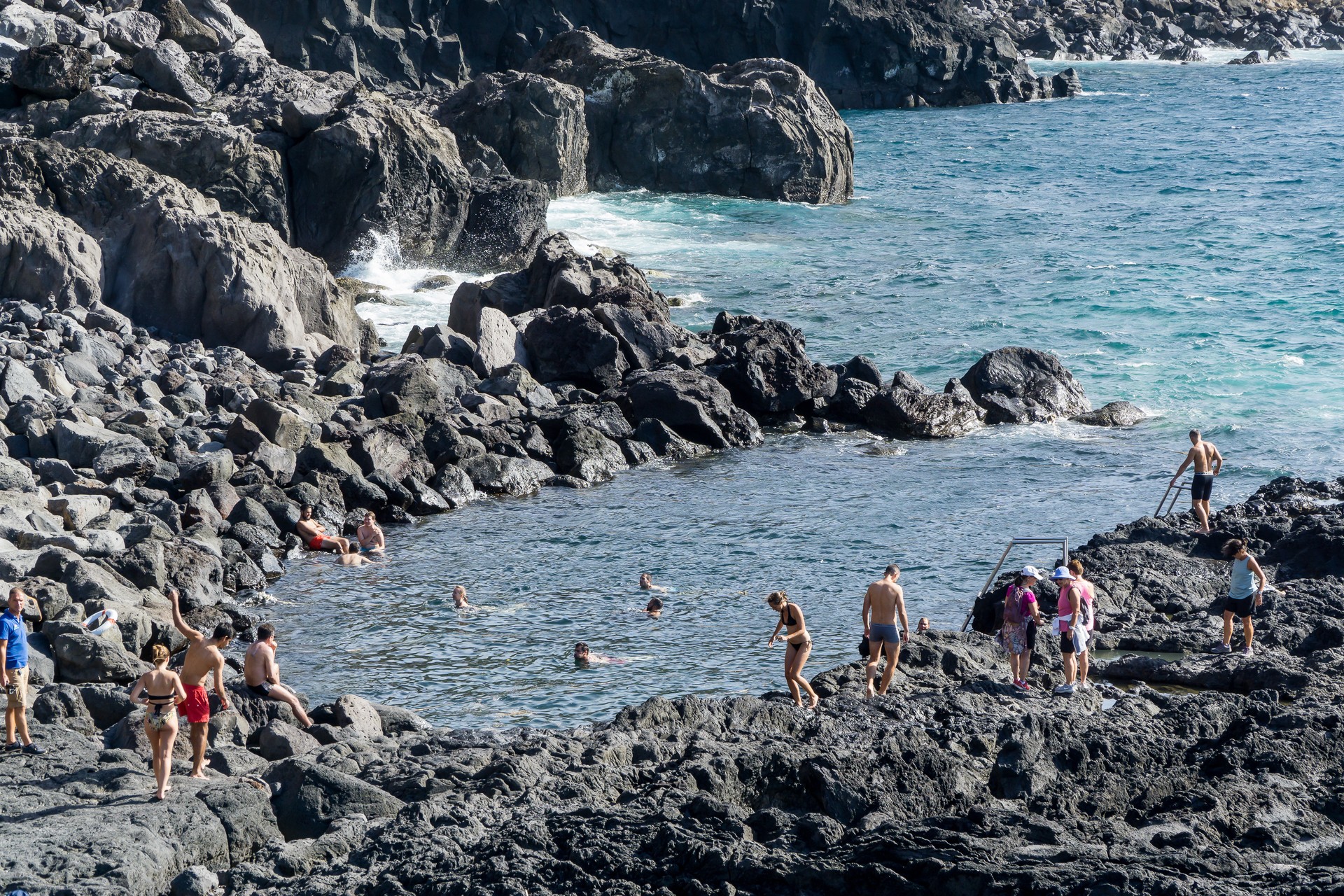 We made our television advert simply to encourage you to travel with the benefit of local knowledge at the heart of everything that you do. But in making it, we also fell head over heels for the Azores archipelago, regardless of whether we were part of the team who went there. If you want to fall in love with it too, then don’t hesitate to enquire. Our local experts perfectly placed to make your dream trip a reality.

Top 5 things to do in the Azores