Get to know Bogota

Sprawling and by turns gritty and pretty, Bogotá has been undergoing a renaissance over the last decade or so and now has a firmly established place on the map of hot destinations. Here’s our rundown of what makes the Colombian capital tick.

The culinary scene in Bogotá is blooming, and the city is becoming known globally for its vibrant restaurants and cafes. From top end fine dining through to a buzzing street food scene, there are plenty of memorable eating experiences to be had in various districts of the capital, and some fresh and exciting dishes on offer. Colombia enjoys perfect growing conditions for many crops and one of the delights of Bogotá dining is that farm-to-table ethos and the searingly fresh produce available to chefs.

Typical dishes to sample in Bogotá include Ajiaco; a deeply savoury and hearty traditional soup packed full of pulled chicken, corn, sliced avocado and two or three varieties of potato, flavoured with a grassy local herb called guenas and topped off with sour cream and capers.

A classic Bogotáno breakfast is Chocolate Santafereño, which forges the unusual combo of hot chocolate with a side chunk of cheese for dunking. This adds an uniquely savoury edge to the sweet drink, and the melted remnants of the cheese can be scooped up by the accompanying cornbread. In terms of fast food, a firm favourite in Bogotá is Arepas; a griddled or fried corn flatbread stuffed with meat, cheese, veg or any combination of the above. This is a popular snack on the go and a delicious treat for any time of day.

Fruit juices are widely available and come freshly squeezed from an array of enticing exotic fruits. Visit the Mercado Paloquemao for the best selection of fresh juices and an overview of the exciting fresh produce available in Colombia. 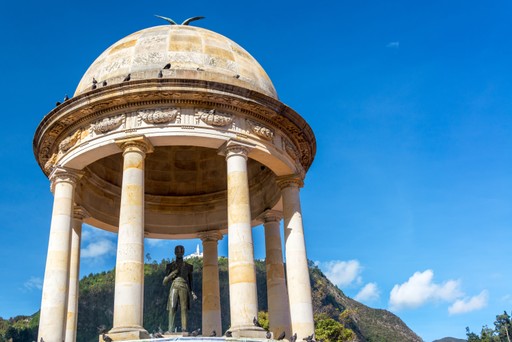 A stroll through La Candelaria district, the atmospheric heart of the city, reveals cute streets opening onto broad squares of low rise colonial architecture and historic churches. A particular feature of this part of Bogotá is the colourful paintwork, graffiti and murals adorning the characterful buildings and street furniture. A bustling hub of this part of town is the Plaza de Bolívar, filled with the flap of pigeons, the bleat of lamas, the aromas of the street food stalls and thronged with people. La Macarena is another pleasantly historic and cultural district with good restaurants and cafés, and a smattering of museums and galleries.

Worth noting is that Bogotá has a packed calendar of festivals, among them a three day rock fest, Rock al Parque; a bullfighting festival; events celebrating jazz and film;and the traditional catholic celebrations surrounding Semana Santa and Christmas.

The city itself is a good starting point, with locals out on café terraces and plenty of street entertainment such as musicians and mime artists dotting the major plazas and thoroughfares. Friday evenings are great for people watching when a major route through the city centre, the Septimazo, is closed to traffic and given over to strolling, promenading, cycling and performance artists. It's a great way to see the city at play and get a calmer perspective.

For a breath of fresh air and a sublime view back across the city, take a trip up Monserrate, a crest of rock the sprouts from the edge of La Candelaria. It's a short hop in a taxi from anywhere in central Bogotá to the cable car station, where you take a ride up to the top of the peak up to the sanctuary for an amazing panorama over the vast cityscape.

The nightlife in Bogotá is legendary, revolving around dancing and living it up in lively city venues such as bars and clubs. The rumba is a popular dance in the city, and if you want to join in try the dance clubs in La Candelaria and the Zona Rosa.

Head over to our destination pages to find out more about our local experts in Colombia and get inspired by their itinerary ideas. Send some details their way to start planning your trip today.