Scored with fault lines, Nicaragua’s landscape is as varied as it is restless. Volcano trekking and boarding, sure to thrill even the most experienced traveller, are a mere snapshot of the many activities the country has to offer. Its diversity and sense of the unknown has captured the imaginations of adventurers and explorers for centuries. When Christopher Colombus embarked on his final voyage, it was here on the eastern shores of Central America that he sought refuge. Then the Spanish followed, delving deeper into the country to find a land rich with tropical jungle, dark coffee beans and volcanic soil. Today, the patchwork of pristine forest, crumbling cities, sparkling crater lakes and towering volcanoes provides a playground for adventurous travellers. Nicaragua is utterly unique in your Central American experience: alive with a sense of adventure and volcanic activity.

Standing at the gates of hell

Masaya is undoubtedly the most impressive of all Nicaragua’s volcanoes and there’s never been a better time to visit than now. Earlier this year, the sleeping giant awoke with a mighty eruption, causing it to spew great torrents of lava and billowing clouds of smoke. In the depths of a black pit, red-hot magma continuously churns and splutters: a living creature in an eternal rage. There are only about 10 of these permanent lava lakes in the world, but Masaya’s ‘waterfall’ of molten rock is unique and has caught the attention of adventurer, Sam Cossman. Last month, the daredevil descended 1,200 feet into the mouth of Masaya, where he installed over 80 different sensors that will measure temperature, humidity, pressure, carbon dioxide and other factors. This achievement means that the volcano can now be monitored continuously and hopefully increase evacuation time for local people.

Masaya is, undoubtedly, an unforgettable experience. Our local experts will take you right to the crater’s edge, where you can look into the ‘gates of hell’ and witness the power of an active volcano.

Board the volcanic peaks of Cerro Negro 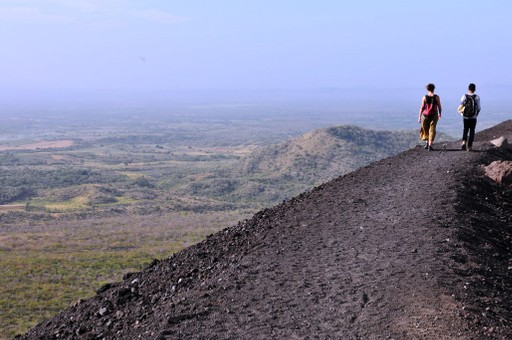 If standing at the mouth of the smoking summit isn’t enough of a thrill, you can always board down one. Volcano boarding is much like snowboarding: speeding down a steep mountain of black, volcanic rock. Cerro Negro, located just outside of León, is still active and fluorescent figures racing down its onyx slopes are a common sight. This relatively young volcano (only 161 years old) is made mostly of penny-sized stones, which allows thrill-seekers to ‘surf’ down the slopes at a speed of up to 30mph. But be warned, this is not for the faint hearted. As the saying goes, ‘what goes up, must come down’, and reaching the summit is the first part of the adventure. Volcano riders must hike up the mountain of loose rock for about 45 minutes to the ‘drop zone’, where they are rewarded with breathtaking panoramas of the volcanic landscape; a martian scene of undulating black peaks. Riders can choose to sit or stand on their wooden boards and race down the slopes for the ultimate adrenaline rush.

If you fancy trekking or boarding Nicaragua’s volcanic giants yourself, our local experts can help. Fill out our enquiry form to start planning your perfect itinerary, or discover more about this vibrant country on our destination pages.