The photogenic landscapes of Namibia

Namibia offers some of the most picture-perfect landscapes on earth. Its topography is one of the most diverse you can find in Africa, with scenery ranging from desolate deserts, to salt plains scattered with skeletal trees, to gigantic sand dunes and colonial architecture. With an abundance of wildlife, this striking country is a delight for both travellers and photographers alike.

This is arguably one of the most scenic regions of Namibia. Home to Namibia's highest mountain the Brandberg, Damaraland is rugged, wild and beautiful in equal measures. Delve into the landscape and explore caves and ravines filled with ancient prehistoric paintings, and voyage to sites such as the rocky outcrop of Twyfelfontein to see engravings that are up to 6,000 years old. 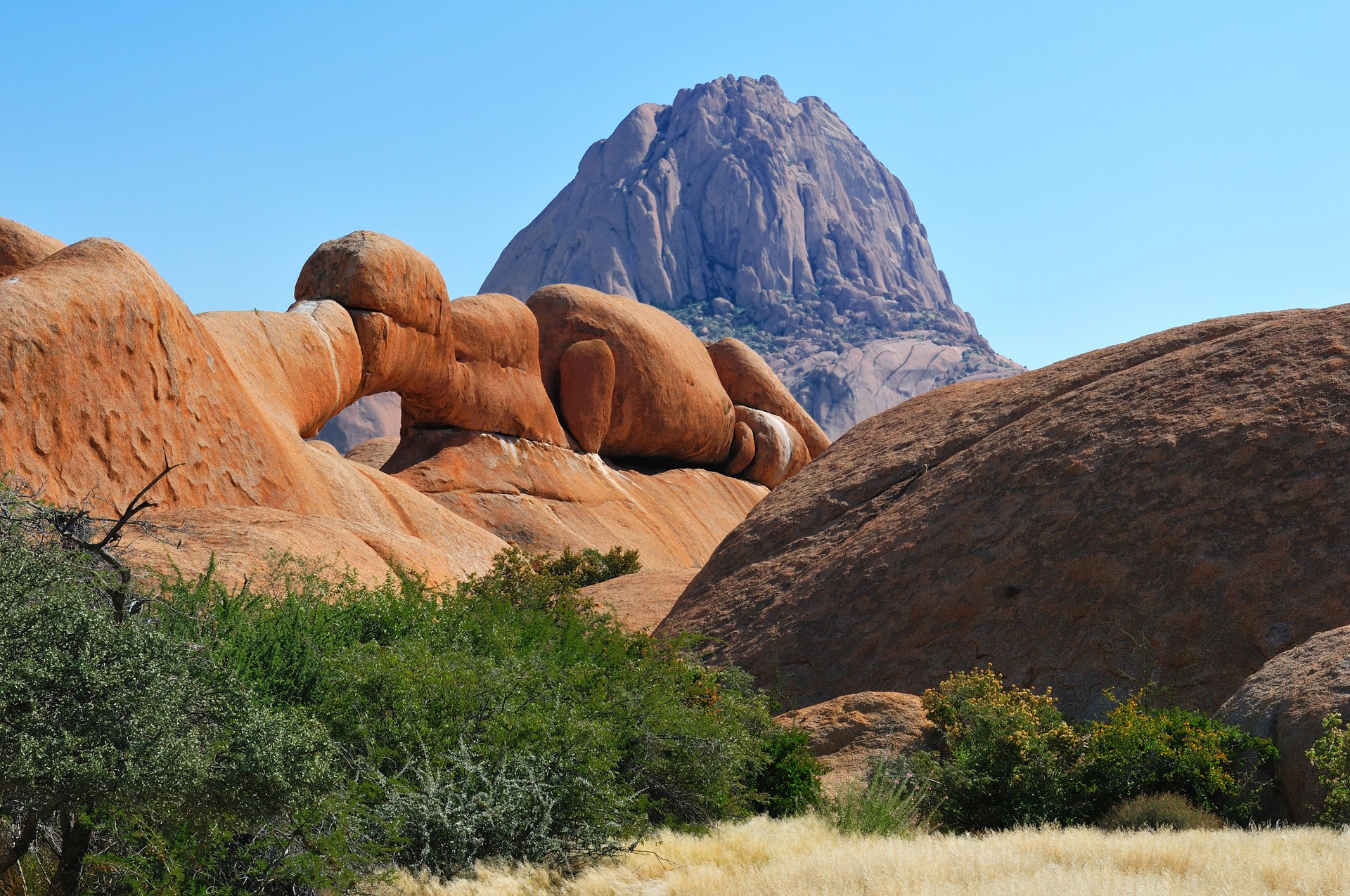 Located in the southern part of the Namib - the oldest desert in the world - Sossusvlei is known as the 'Sea of Sands' due to the breath-taking views of rolling dunes found there. The ochre colours of the soaring dunes are uncannily beautiful, the older dunes (some with sand around 5 million years old) being richer in colour than the comparatively young ones. These red giants tower at around 300 metres high, with one of the largest (nicknamed 'Big Daddy') standing at an impressive 325 metres, but the biggest, 'Dune 7' reaching a staggering 388 metres. 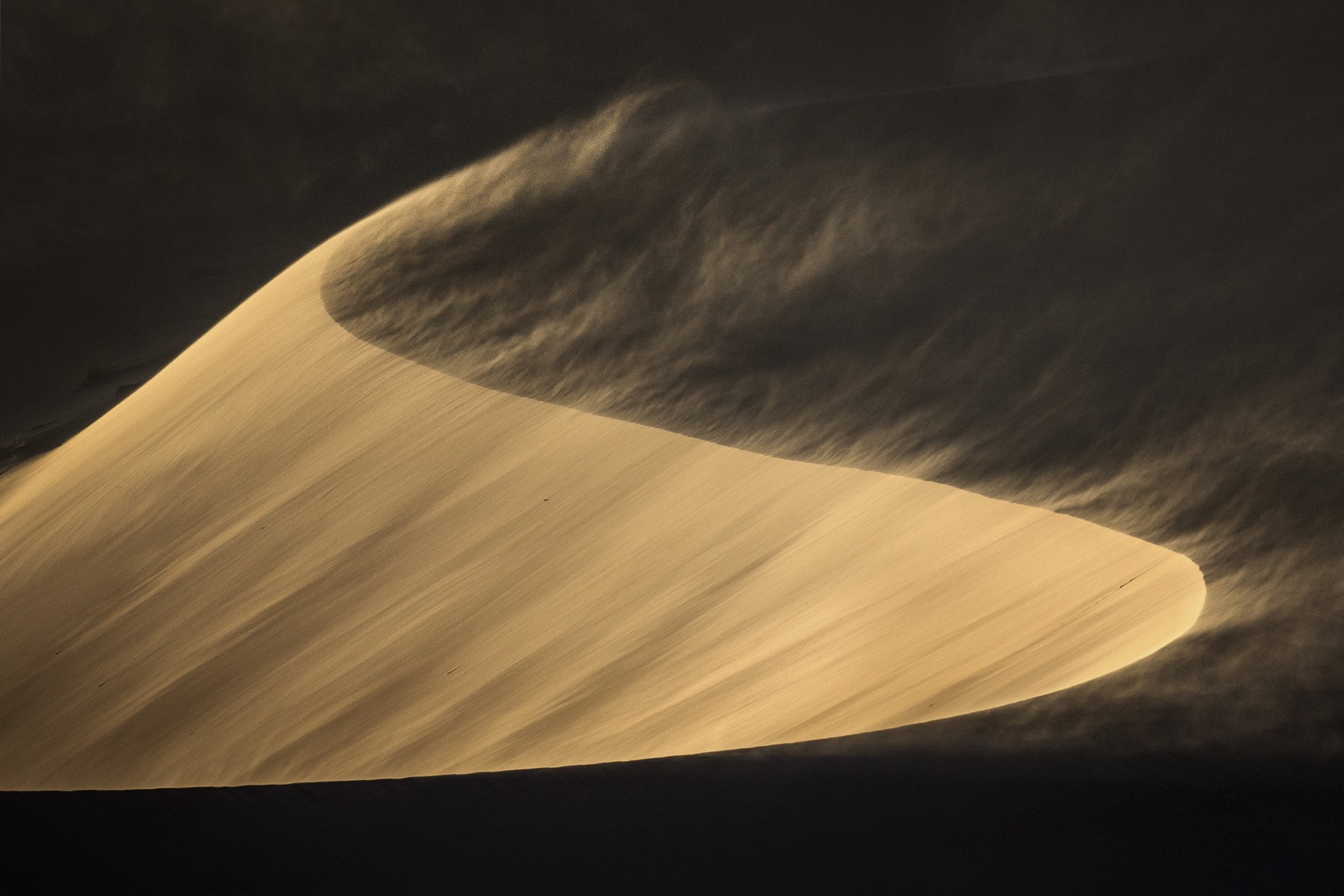 Just 2 kilometres outside of Sossusvlei lies Deadvlei, an eerie white clay pan whose name translates to 'dead marsh'. The blackened skeletons of ancient acacia trees stand silhouetted against the white pan, red dunes and blue sky making for an incredible photo opportunity. The trees themselves are thought to have died around 600 to 700 years ago from dehydration, and have been scorched black by the intense sunlight and heat. Although they aren't properly petrified, they don't rot as there simply isn't enough moisture to allow for decomposition.

The Etosha pan, part of the Etosha National Park, is a 120 kilometre-long lakebed, spanning such a vast area that it can even be seen from space. In the language of the local Ovambo tribe, Etosha means ‘great white place,’ due to the shimmering green white appearance of this mineral pan. 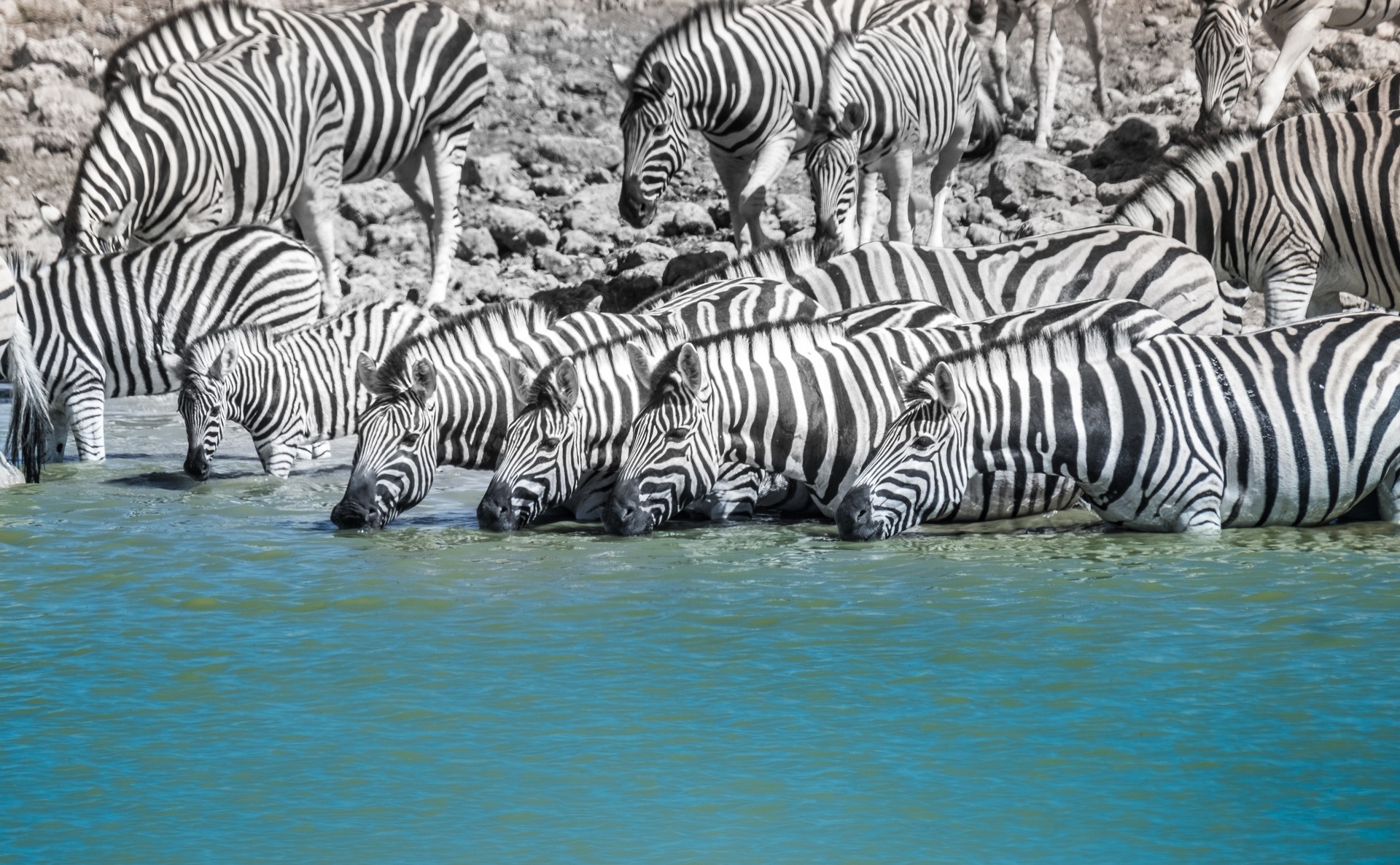 The National Park itself is renowned for its diverse wildlife and vegetation, ranging from dense bush to open plains. Home to around 114 different species of mammal, and with the largest population of free-roaming cheetahs, it is a paradise for nature lovers or budding wildlife photographers.

Located in the south of Namibia, this canyon is truly immense. Formed over millions of years by water erosion, the enormous, rocky ravine is about 100 miles long, 27 kilometres wide and at some points up to 550 meters deep, all of which combines to make some breath-taking views. 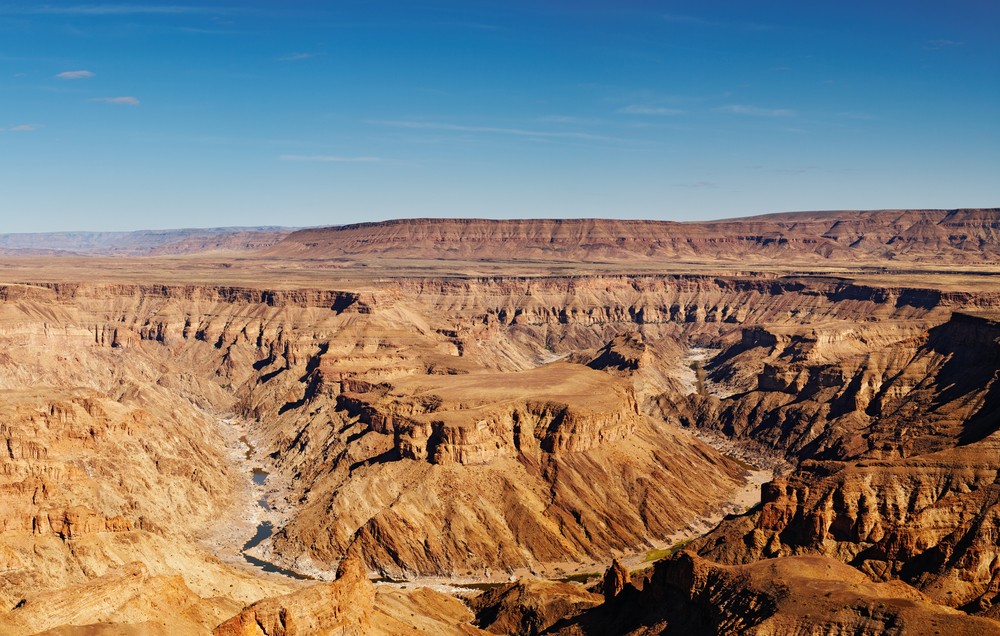 There is a 185 kilometre hiking trail that follows the Fish River through the canyon, offering some beautiful scenery, but it is a serious undertaking and our local experts don't recommend you attempt it unless you are an extremely experienced hiker. There's no telephone signal, once you are in the canyon there's no way out unless you back track to the beginning or reach the end, and in inclement weather there's very few places to shelter. As if to highlight the challenging nature of the trail, there is an annual Ultra Marathon run through the canyon each year, testing people to the very edge of their limits! All-in-all, we'd suggest just finding a look-out point or two and taking in the views from on high. 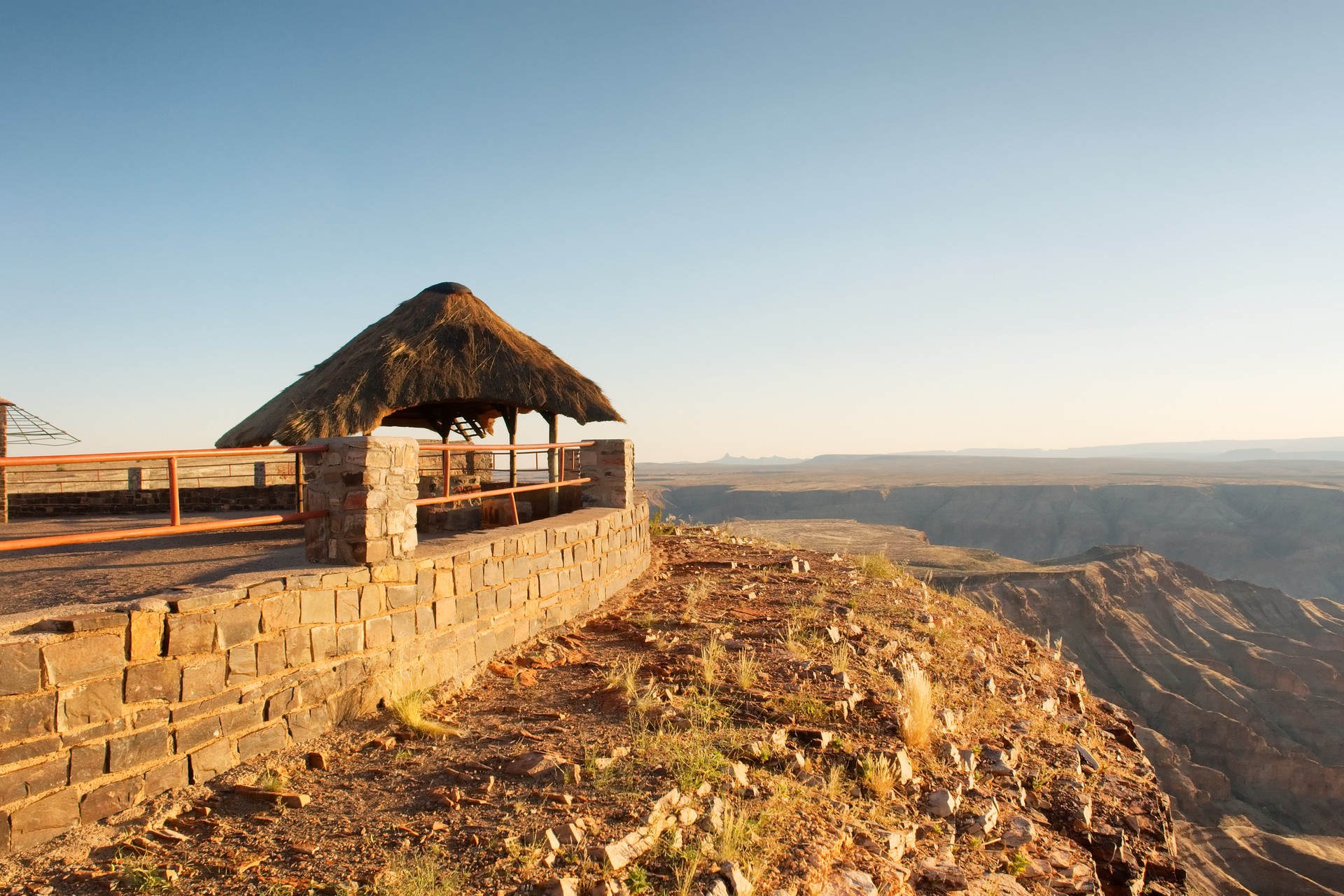 Namibia’s largest coastal city, Swakopmund, is starkly different from the rugged, desolate desert that surrounds it. Situated on the Atlantic coast, the sandy beaches are an oasis of calm, perfect for relaxing and unwinding after a few days exploring Namibia's wilder areas. The city itself is cosmopolitan and bustling, and bizarrely offers a hint of Bavaria with its (albeit colourful) Germanic architecture - a small part of its population even still speaks German.

If you have been inspired to see the incredible diversity of Namibia’s landscapes for yourself, then get in touch with our brilliant local experts. They will listen to what you want to do and will create a bespoke itinerary, tailor-made just for you. To speak to someone in the TravelLocal office, please call +44 (0) 117 325 7898.