One of the defining characteristics of Nepal is its temples. The sheer density of temples, shrines and other religious monuments is incredible, and there are few places in the world where you will find such a concentration of cultural heritage in one region as the Kathmandu Valley. The roots of religion in Nepal are deep, and one of the reasons the temples of Nepal are so unique is that they are often used by members of more than one faith for worship. Buddhism and Hinduism have both been important to Nepali people for many centuries, and in fact these two faiths in Nepal have become intertwined. Many worshippers’ belief system is a fusion of some elements from one faith and some from the other, providing a unique and fascinating new angle on the religions of the region. 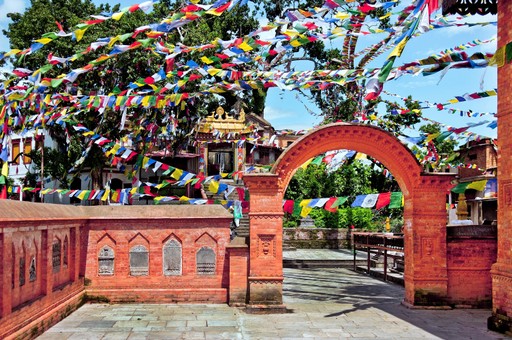 One thing most Nepali worshippers have in common is that the temple is central to their participation in religion. In order to practise their faith they will make sure they present themselves at the temple and carry out rituals, making the temple an important focus of the community. Most temples in Nepal are active places alive with visitors, people coming and going to worship and to meet.

Many of Nepal’s temples did not survive the terrible earthquake of April 2015 unscathed. Some collapsed entirely, some suffered heavy damage, and some were relatively untouched. The restoration work has started in earnest at many of the sites, but there have been some disagreements about how best to approach repairs. Visitors from overseas by and large enjoy the great age of such monuments and find it pleasing to come across architectural features which date back many hundreds of years. The romance of history and ancient craftsmanship is a driving factor in their interest in visiting the temples, and tourist dollars are important to the local economy.

Local people, however, do not usually have a similar esteem for ancient construction, so they find it hard to understand why the temples would be rebuilt using the original, damaged materials. For them, any rebuilding necessary is surely a chance to refresh and renew. For many faithful, it is primarily the site which is considered holy rather than the building itself, so they see no pressing need to rebuild in a hurry or to use the original materials. Here is a delicate balancing act in which the authorities are attempting to tread a fine line in order for the local people who use the temples to feel like their voices have been heard, while enabling restoration work to allow temples to attract history-loving tourists.

We’ve put together this introduction to some of the most important and impressive of Nepal’s ancient temples. 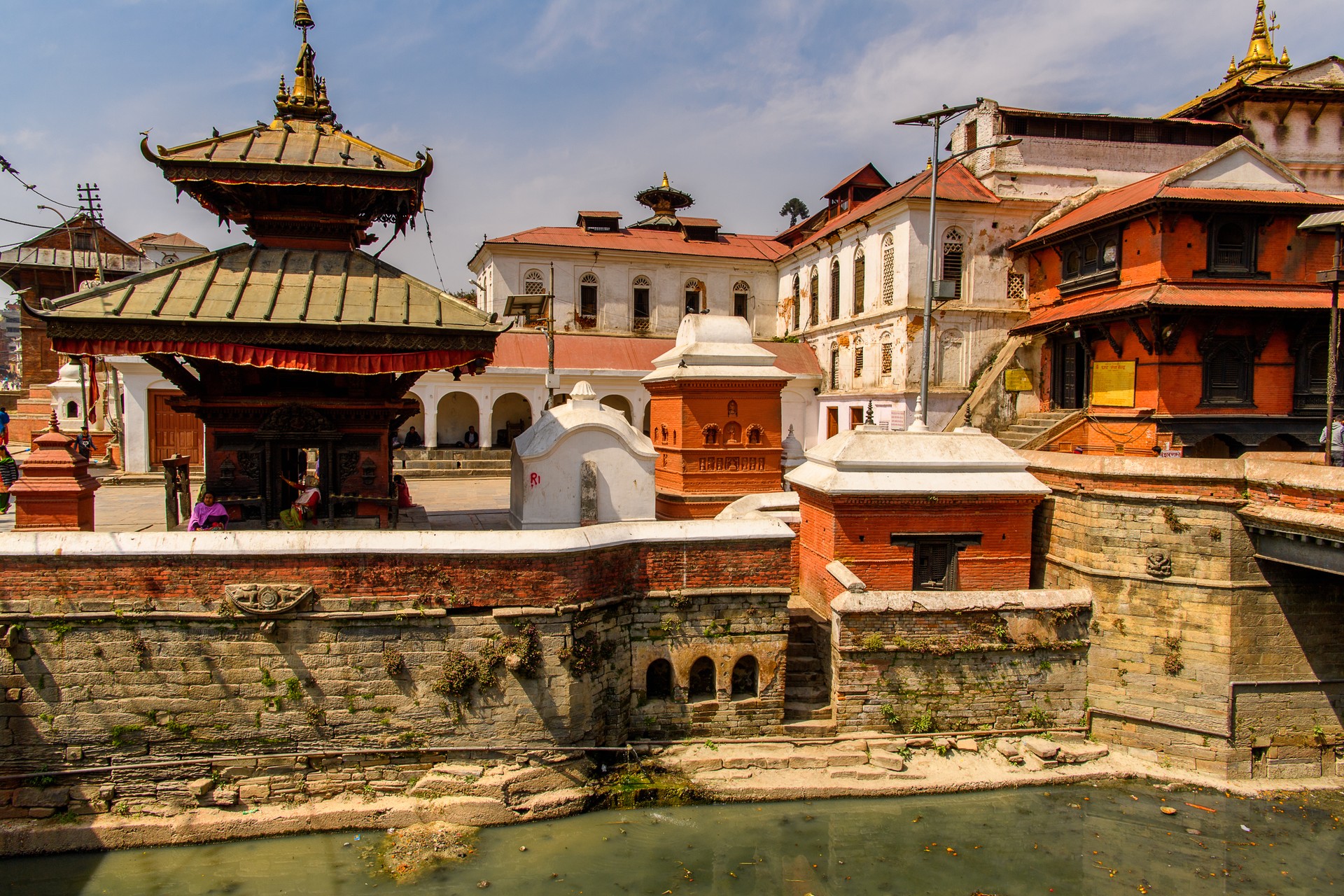 Nepal’s largest temple complex sprawls alongside the Bagmati river, a site considered especially holy to Hindus. The temple is dedicated to Shiva, and in fact for his followers it is one of the four holiest places of worship in all of Asia. It contains a sacred Shiva lingam, or phallic symbol, and a significant statue of Nandi, Shiva’s sacred bull. Pashupatinath hosts the important religious celebration of Maha Shivaratri every spring, attracting many thousands of faithful to the temple complex. It is also a holy site used for the cremation of Hindus along the bank of the river, and consequently the temple is always a hive of activity, day and night. Luckily Pashupatinath was spared major damage in the 2015 earthquake, and although there were some external cracks, the structure has not had to undergo any significant repairs. The main pagoda with its golden roof and intricate wood carvings is a feast for the eyes.

Not far from the town of Bhaktapur sits the oldest temple in the Kathmandu valley, Changu Narayan. The complex and the main pagoda is a masterpiece of carved woodwork and ancient elegance dedicated to the Hindu god Vishnu. The terrible earthquake in 2015 did not destroy the iconic two tiered pagoda, although it has since been shored up by several wooden struts to ensure its structural integrity. Other historically and culturally important buildings in the complex did not fare so well, including the museum and the Krishna Mandir which were seriously damaged but are being rebuilt. One of the reasons this temple is such a fantastic one to visit is that it is the least visited of the UNESCO listed temples in Nepal, so it is authentic and peaceful and the locals are very friendly. Changu Narayan is surrounded by a pleasant garden filled with interesting stone carvings dating from the Licchavi era which are representations of Vishnu in all his various incarnations. 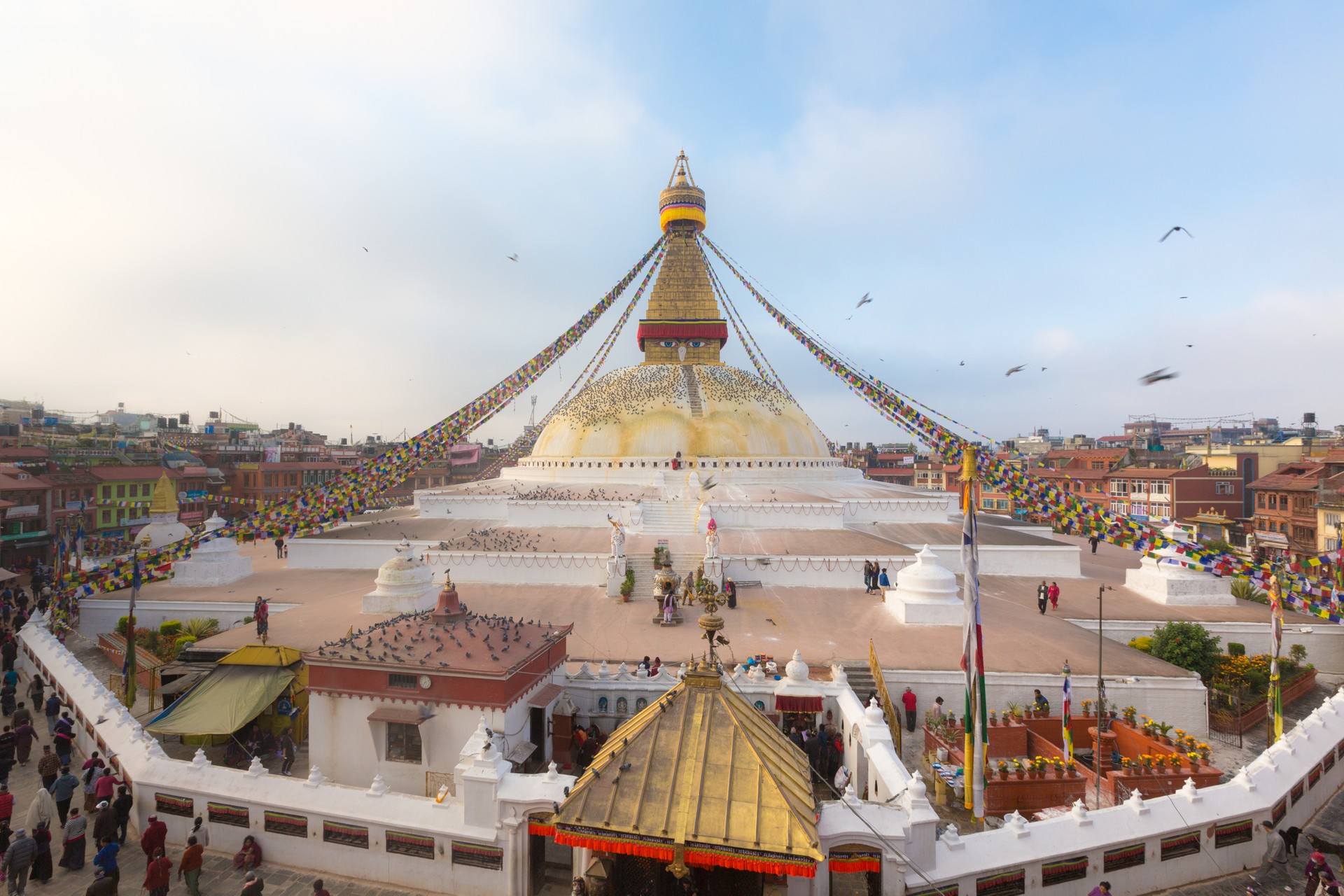 A huge gleaming white dome topped with a golden spire festooned with fluttering prayer flags is Boudhanath Stupa, one of Nepal’s most impressive places of worship. Of huge importance to Tibetan Buddhists, this is the holiest site outside of Tibet. The Stupa is said to house a relic of Buddha, and hundreds of devotees flock to the temple every day to perform religious rituals, such as spinning the prayer wheels set into niches at the base of the plinth, or prostrating themselves on the ground in the courtyard. Up on the base of the spire all-seeing eyes of Buddha have been painted, looking out in all directions from the top of Boudhanath, one of the largest stupas in the world. The upper section above the dome was badly damaged in the 2015 earthquake, and had to be removed, but the Stupa has now been repaired and the spire replaced, so it is fully back in action. 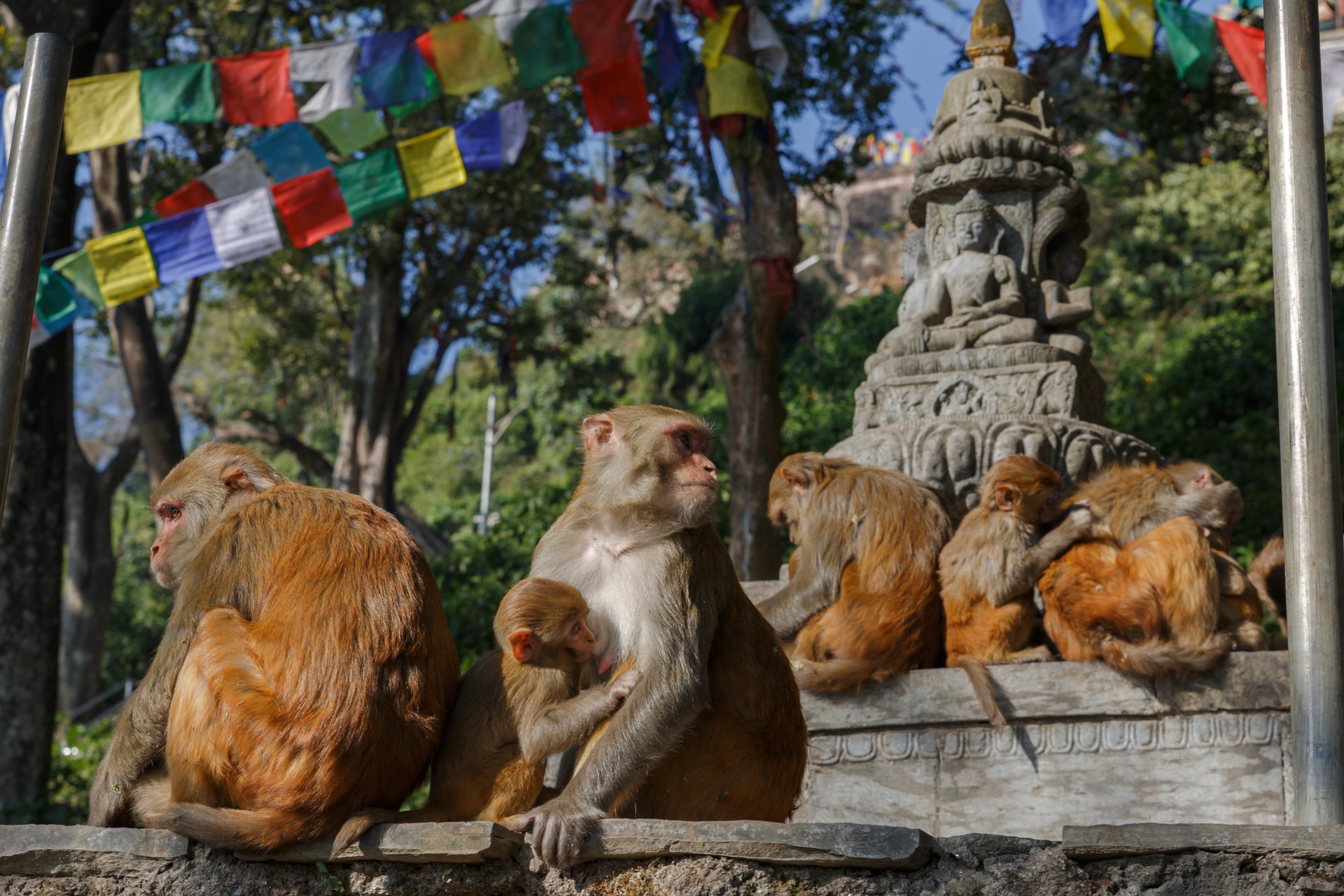 Perched on a hill to the southwest of Kathmandu you’ll find Swayambhunath, an imposing temple which is reached by climbing 350 steps up to the stupa itself. This Buddhist temple is also known as the Monkey Temple, and once you arrive in the vicinity it will become clear why. Monkeys roam throughout the complex and though they are not aggressive they are not shy. Once you scale the stairs you are greeted with a bustling scene scented with incense and busy with worshippers spinning prayer wheels and attending to temple rituals. The tall golden spire is visible from many points in the city and has thirteen steps, representing the thirteen stages to reach nirvana. The view over Kathmandu is great on a clear day.

Nepal’s fascinating heritage is waiting to be discovered, and with the expertise of our local operators this amazing destination will really come to life. All you need to do is send a few details to them and they will start putting together some inspiring itinerary ideas tailored to your requirements. To speak to someone in the TravelLocal office, please call +44 (0) 117 325 7898.